Three weeks ago we had never considered going to Sardinia even though we had met someone from there while in Piedmont and another person who had raved about it. It was a bit too far off the itinerary we had planned. Then we kept on meeting people who had been there and loved it, including someone who had worked there for 2 years. He mentioned we could get the ferry from Livorno and back to Rome and continue our trip from there. He also said that the temperatures in the south near Lecce where we had planned to go would be well into the 30’s by the time we got there even going directly down through Tuscany and Umbria. He said Sardinia would be a more comfortable temperature. As we were going to be near Livorno with meeting Anna at Pisa, we thought why not?
The day ferry took about 7 hours and we landed at Oblia on the northeast coast and went straight to the campground Richard had found, on the beach at San Teodoro. It has a lovely beach but even though late May – early June is supposed to be relatively quiet in Sardinia we were surprised at how many people were on the beach. 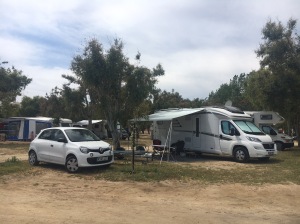 We visited a small fortress village nearby at Posada which contained the ruins of a castle dating from the 1300s plus a lookout tower which has been restored with a commanding view over the countryside. On one side the houses below the castle remains appear to cling to the cliff.

I found on the internet an interesting place for dinner – fixed menu, agriturismo restaurant where everyone had to arrive before 8.30 pm when a gong sounded and the food started to appear. The setting was lovely – a stone and thatch round building. The food became a deluge – I think we had about 9-10 courses and they weren’t small. There was an incredible variety focussing on Sardinian specialities and it was all very tasty, washed down of course by unlimited quantities of rough red wine served in a litre jug. Actually it grew on us and it cut through the richness of some of the food. Half the time we had no idea what we were getting as almost no English was spoken. I thought it would be fun to post the photos of the food to show just how much we were given – I missed out photographing one of the dessert courses which were served with a choice of limoncello or grappa.

After 2 nights at San Teodoro we decided to move on to the northern end of Sardinia as it was closer to some of the places we wanted to visit. One thing we have realised is that away from the main route that crosses the centre of the island, it takes a long time to get anywhere as the roads are quite windy and often have a 50km/hr speed limit which is pretty much ignored except in the places where it is not possible to travel any faster. The countryside in the northeast is very hilly with a narrow coastal plain in some areas and is very arid and rocky, reminding us of the islands in northern Croatia we visited several years ago. Lots of sandy beaches interspersed with rocky coves. 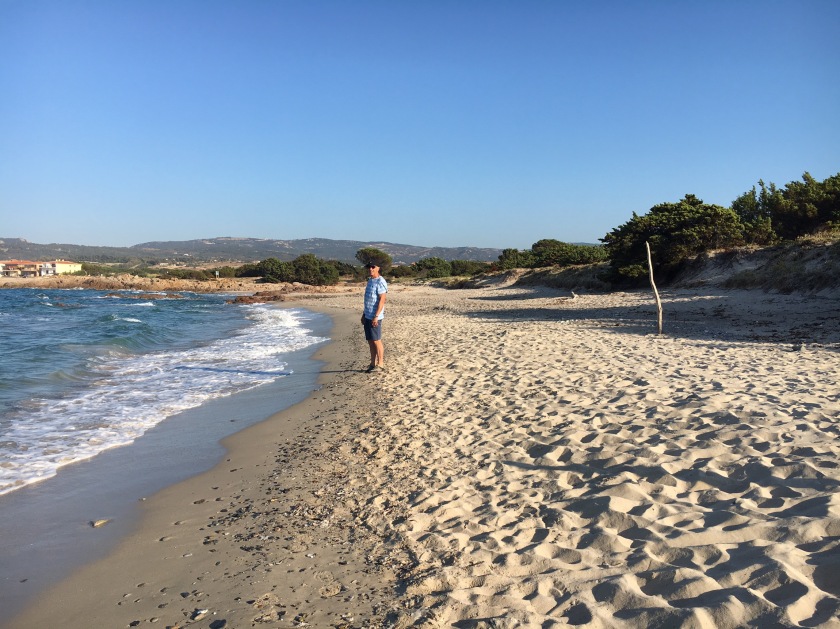 We found yet another tower dating from the 1300’s. 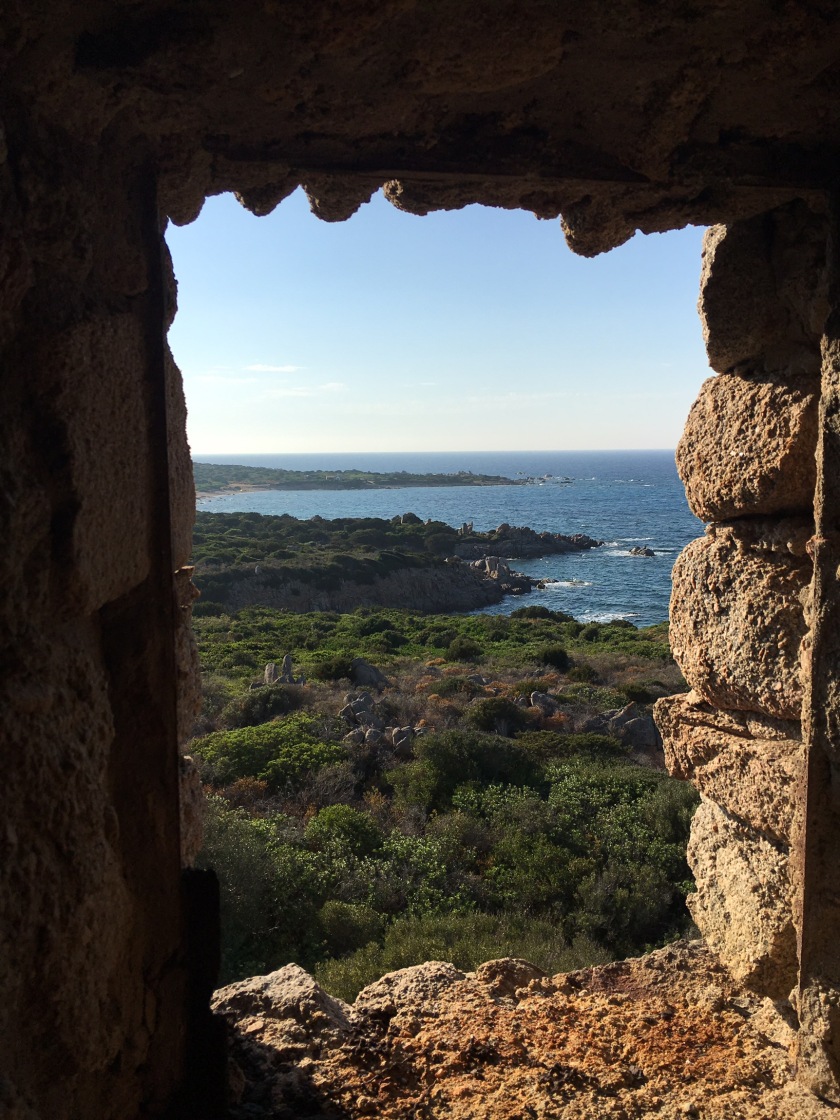 We booked a trip out on a yacht to the Maddalena Islands near the town of Palau. It was a wonderful day and we even sailed  when there was enough wind. The water is so clear and turquoise blue I couldn’t resist having several swims. 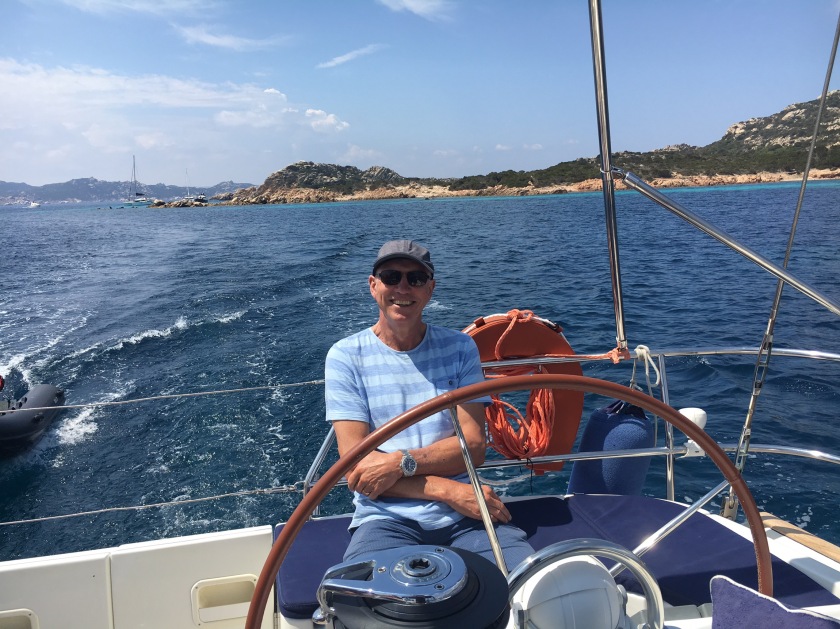 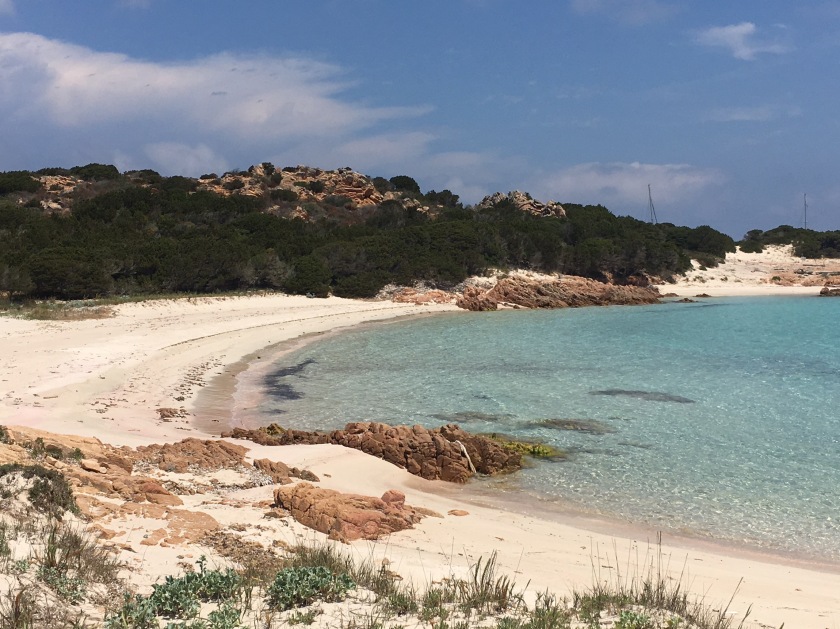 We visited this beach where the sand is quite pink in places. Our skipper (with ponytail) took us to meet his friend who lives like a castaway in this structure on the island during summer who explained how the pink colour comes from a microorganism which lives on a plant that grows in shallow water around the area. the currents converge to bring all the pink from the dead microorganisms to this beach only. We were sitting on platforms swinging on ropes in his “lounge”. 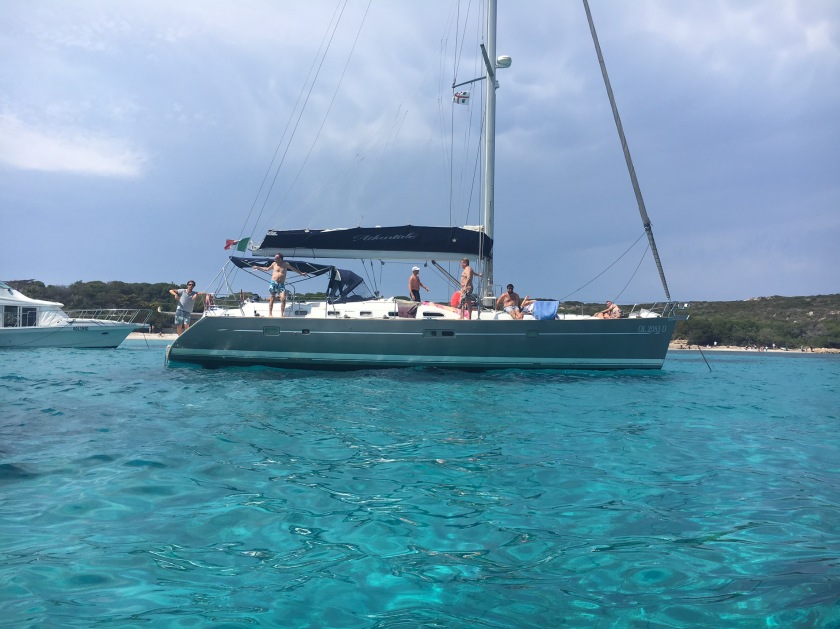 The northeast coast has quite a few places worth visiting. We came across one of the nuraghe that Sardinia is famous for. These are ancient dwellings and other structures were built 3500 years ago during the Middle Bronze Age! It is incredible to think that these have remained intact for so long. This one was 2 storeys high and came complete with a population of miniature bats. 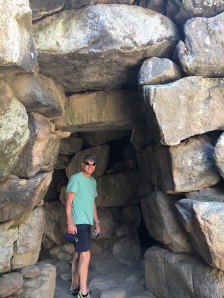 Tempo was a quiet hill town near the nuraghe where we stopped for lunch. A lot of cork trees grow in this area and we came across this amazing shop where the owner has created fabric from cork and is seeking a patent for the process. He had beautiful dresses, quilts, even curtains as well as handbags and shoes. The cork fabric was like very soft suede to the touch.

Our next stop was Castelsardo on the coast west of where we were staying which boasts a prominent castle and associated village below it. Great views from the top. 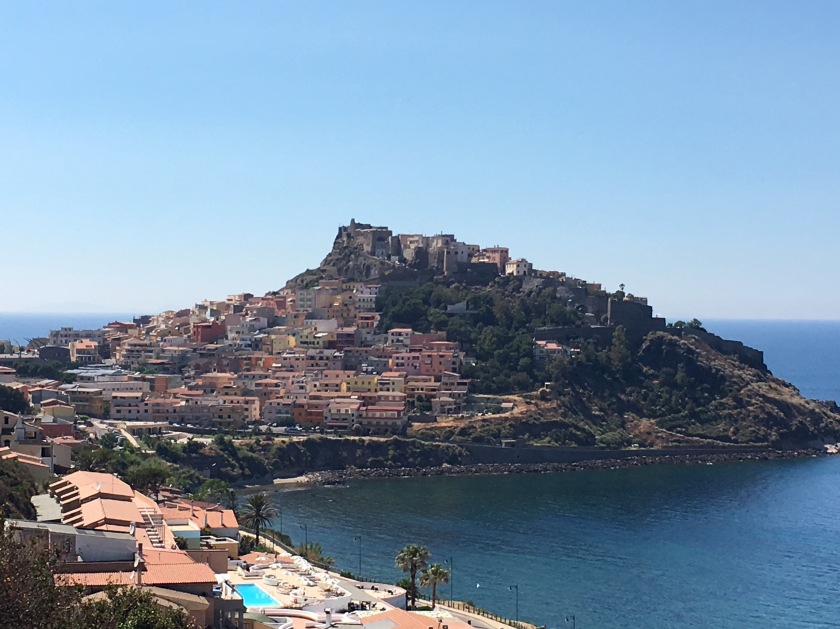 This blog has become very long!! So much to talk about. We are really enjoying what Sardinia has to offer now that we are away from the east coast near the main port we arrived at, Olbia.

Next blog – a day trip to Bonifacio at southern end of Corsica.