The more we read about Lake Como the more we thought it was worth yet another detour from our planned route. Campsites in the best areas are hard to find but we found one at the village of Lenno, close to Tremezzo and Menaggio and across the water from Bellagio, the famous small town on Lake Como. It’s a great location with ferry connections to everywhere on the lake although the campground is pretty basic. The road was quite narrow in places through the villages but luckily often there were traffic lights restricting flow to one direction at a time.It is the first time we have had problems with the electricity supply to this extent with only 3 Amp of power available. The lowest we have struck before was 6 Amp at Geneva. We have had to run the frig on gas and the first night someone else was also plugged in and we couldn’t use anything electric except the lights – no TV and no Nespresso! We were having it tough.

The waterfront at Lenno.

Lake Como is even more beautiful than Lake Maggiore with incredibly steep hills and villages along the coast and dotted over the steep slopes. The villages are quite colourful with terracotta, ochre, pinks, whites and greens predominating. By taking the slow ferry we called in to numerous villages. The lake is also known for its huge stately villas with beautiful gardens situated around the lake shore. A few are open to the public like the Villa Carlotta below.

A Villa at Lenno

After we arrived we took the ferry across to Bellagio a very pretty place where we ended up having an early dinner before catching the ferry back. I wouldn’t want to visit there in peak season though as there were still quite a few tourists there even at this time of year.

We also visited Menaggio and went to the bottom of the lake to Como where we spent a few hours- the centre of the town is car free which makes wandering around a pleasure. You can walk for a long distance along the lake shore around Como much of it through a park. It has a huge Duomo, renowned for its intricate stone carvings. 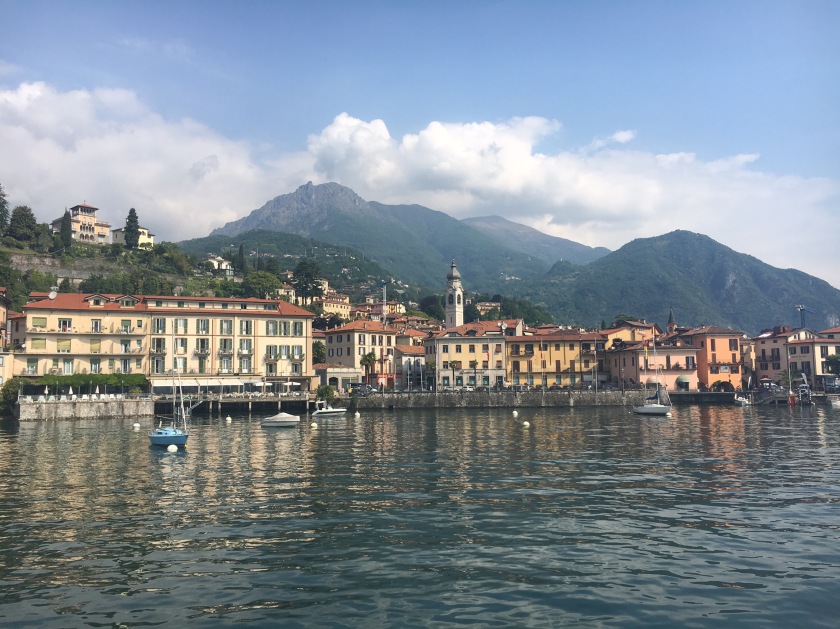 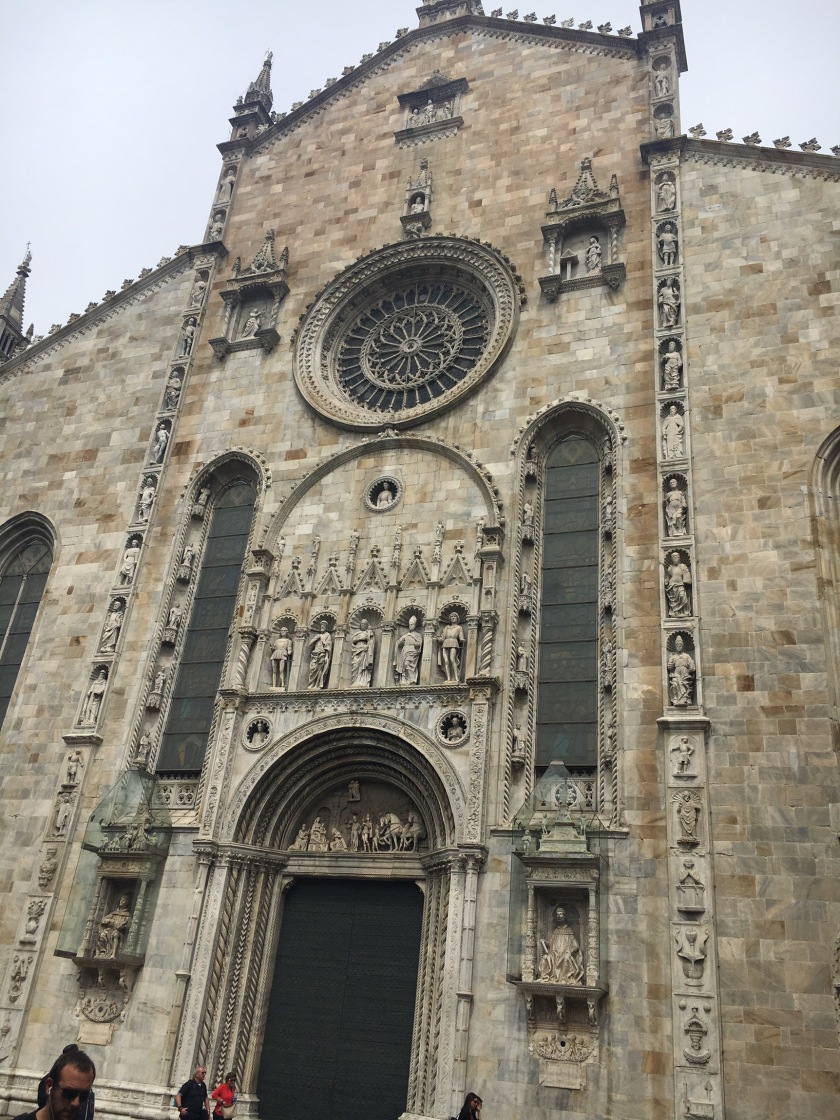 After morning rain we finally got out to walk part of the Greenway which is a series of paths that go for 10 km through the villages along this part of the lake with great views and often on old cobbled paths. It went past the stunning Villa Balbiano. 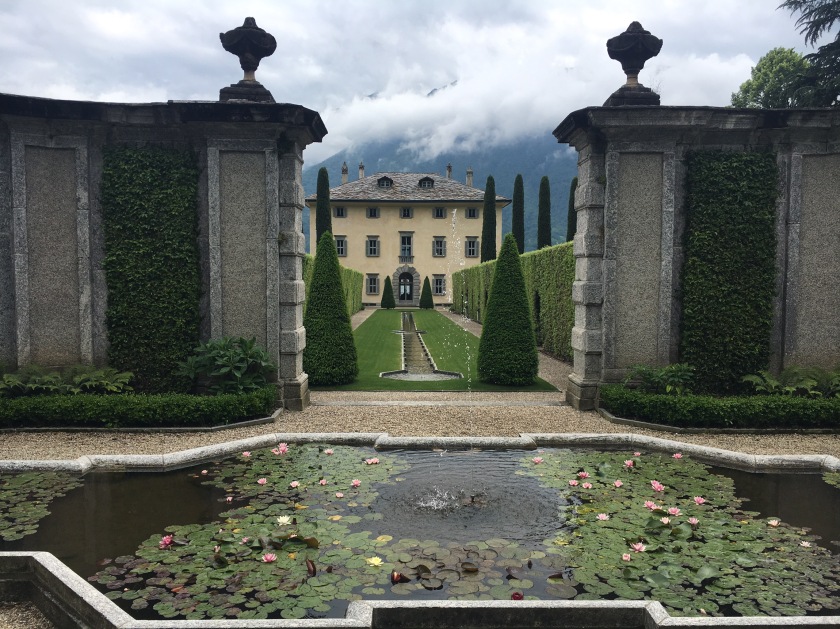 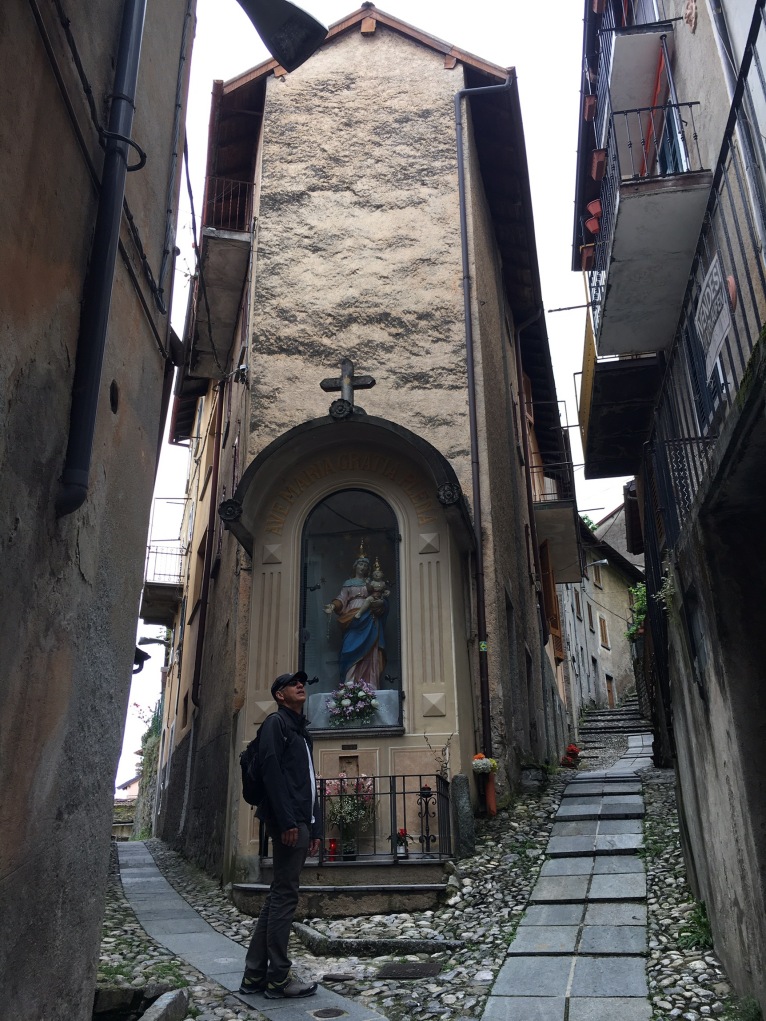 The next day was beautiful so we visited the Villa Balbianello, famous for its gardens, on a peninsula close to the campground. 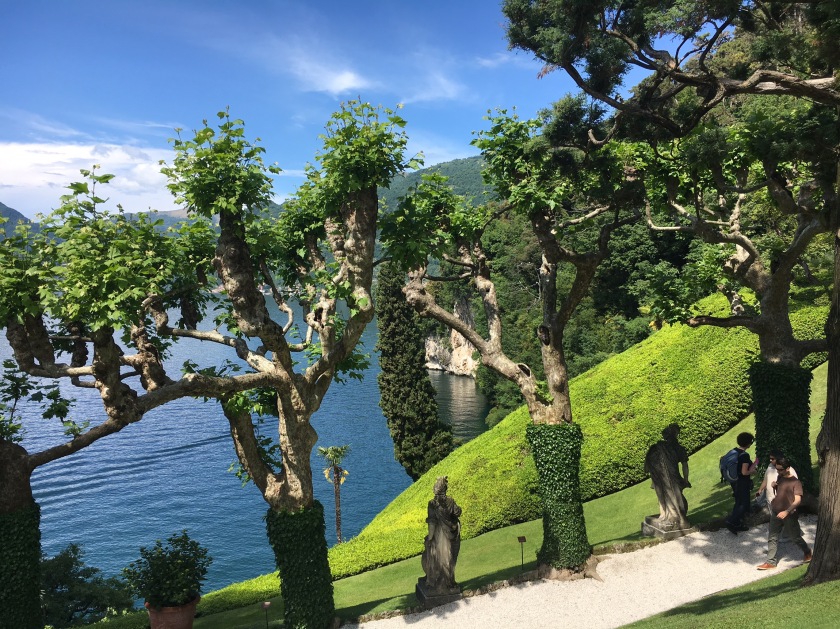 We also hiked up to the Sacro Monte di Ossuccio which is on the Humanity World Heritage list. It is a series of 14 shrines built between 1635 and 1714 on the path to the Santuario della Beata Vergine del Soccorso high on the hill overlooking the lake that depict religious scenes with complex life size statues and frescos made of  stucco and terracotta. What is amazing is that the shrines are like small enclosed buildings which look as if they have been left in their natural state since they were created, complete with dust and broken bits!

Here Richard is trying to see inside a shrine. 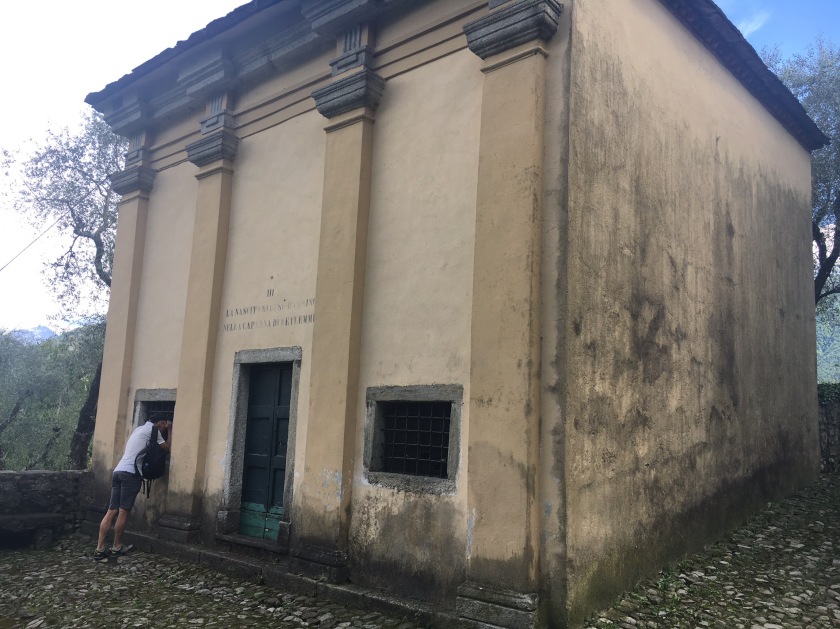 It was like a treasure hunt wondering what we would find at the next one. The statues are so lifelike and have retained their original colours. There is no lighting and for most of them we had to peer through thick mesh screens. Totally not changed for the tourists!  It was a challenge to get photos – some by wedging my phone between the bars and the mesh. Here are a few of the best ones. Remember they are statues, not paintings.

We found Lake Como even more interesting than Lake Maggiore with even more dramatic scenery. Lots of hiking around our area – we would have liked to do more but decided we would be best to leave on a Sunday when there are very few trucks on the narrow road out to Como.