After a couple of recommendations that Piedmont was a great destination for sampling good food and wine, we decided to change our original plan of heading south in Italy and found ourselves in the middle of Barolo and Barbera wine country between the towns of Asti (the home of Asti Spumanti – not impressed with the town ) and Alba – a delightful town with a great market and shops showcasing the local produce – like white truffles, wine, more wine, sweet stuff featuring hazelnuts etc etc.

We had stocked up on French cheeses before leaving France being worried that Italian cheeses wouldn’t compete. How wrong we were. Loved this cheese stall – came away with yet more cheese. There was even one covered in dried grape skins.

Our campground was surrounded by vineyards and hazelnut trees interspersed with wheat fields – everywhere you look there are small hilltop villages with the obligatory church (some very old) and sometimes a Castello. A beautiful landscape – the area closer to Alba around Barolo is protected as a UNESCO landscape of significance. The whole area is almost ringed by the Alps – an impressive back drop. 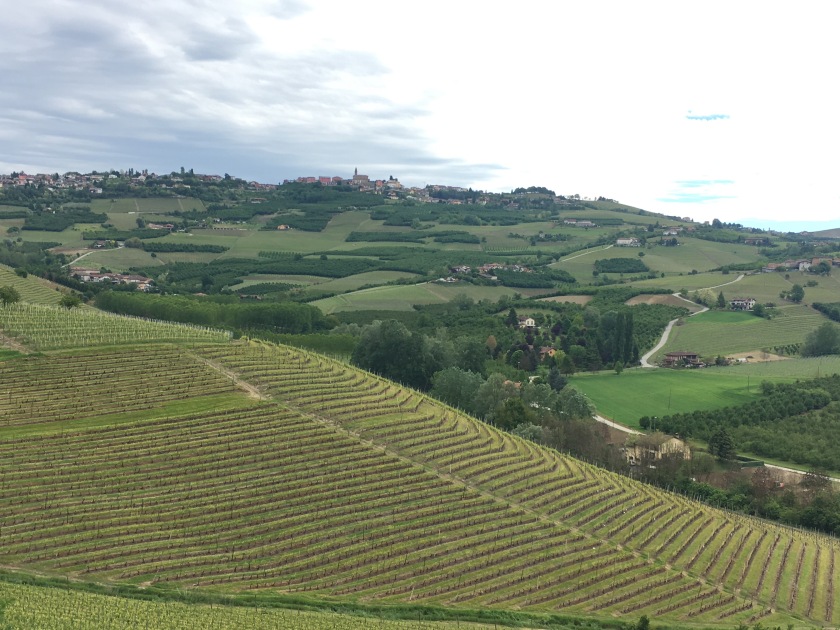 The town above is Montforte d’Alba where we enjoyed a long lunch on a Sunday which focussed on local specialities. 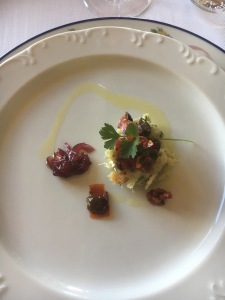 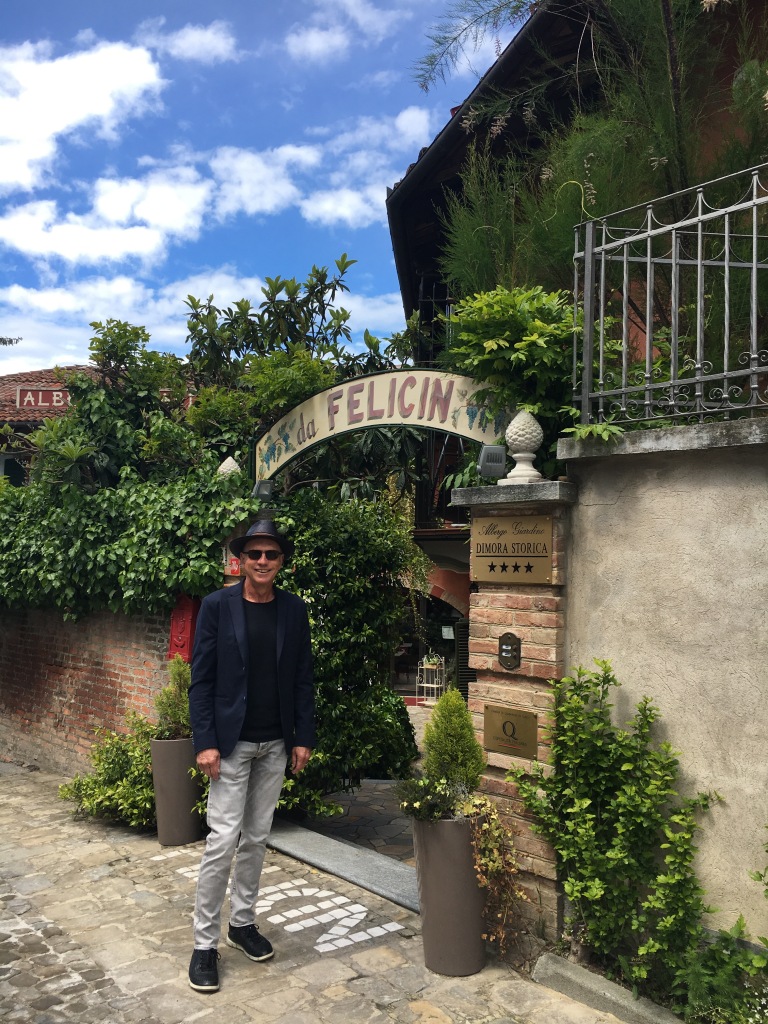 The chocolate torta is special to the area –  delicious and not too sweet with an unusual texture. The chefs were busy picking herbs from the extensive herb garden as we arrived. 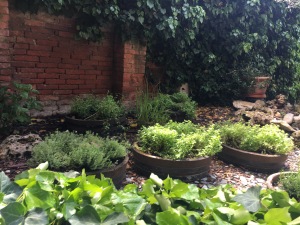 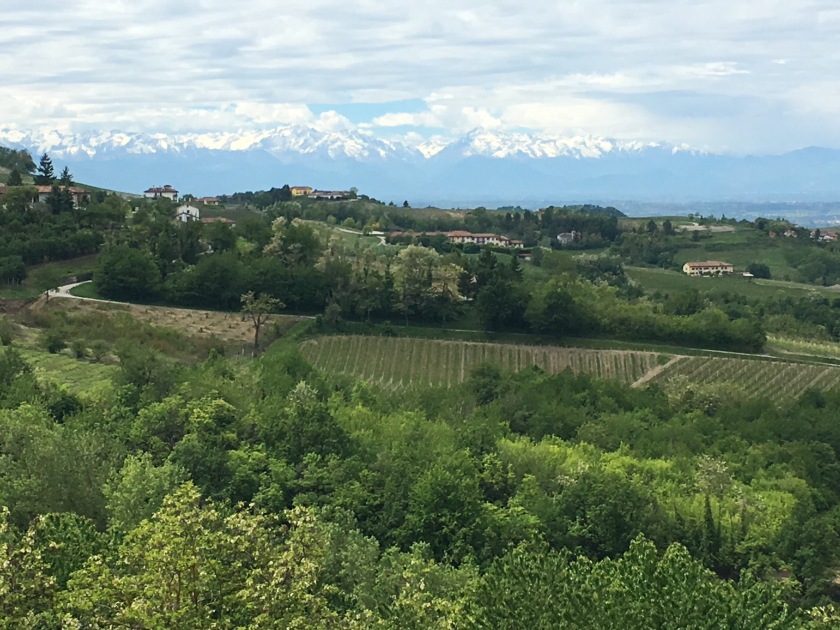 Those of you who know my wine drinking habits know that I am not a big drinker of red wine – unless it is smooth, rich and full bodied- like an Amarone !! Now I have discovered Barbera wine and I am hooked. The problem is that, like the Amarone, the alcohol content is much higher than standard wine. It packs a punch but is so easy to drink. We bought some in the Alba market and if only we had known how good it was we would have bought lots – can’t believe how cheap it is too. We also went wine tasting at a upmarket vineyard at Monforte d’Alba. A very civilised experience with our own personal guide. There we tried several types of wine including the famous Barolo wine – called the “king of wines”. For me, though, Barbera is still number one. Both wines come from a limited and defined area with the soils giving each wine its particular characteristics.

Some photos from villages in the area. 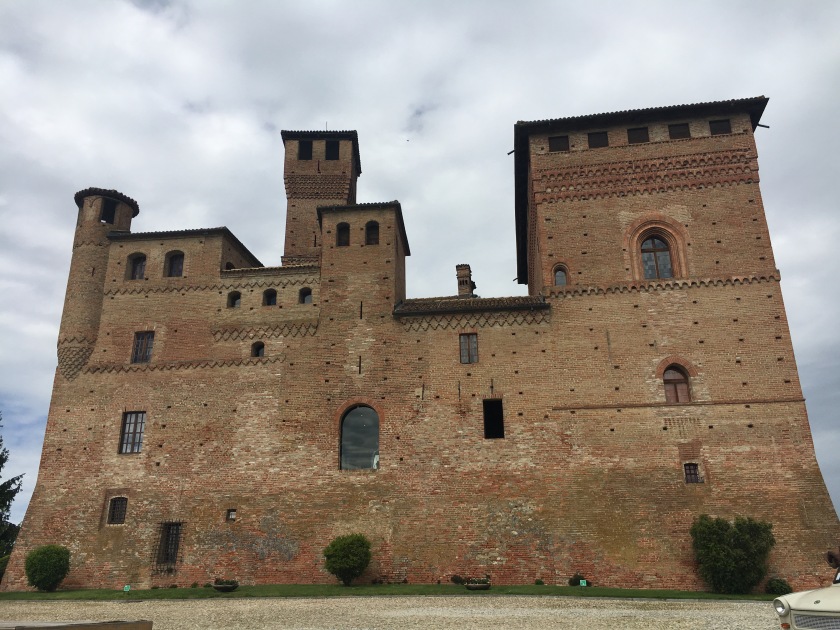 Village of Barolo – with a museum dedicated to corkscrews! 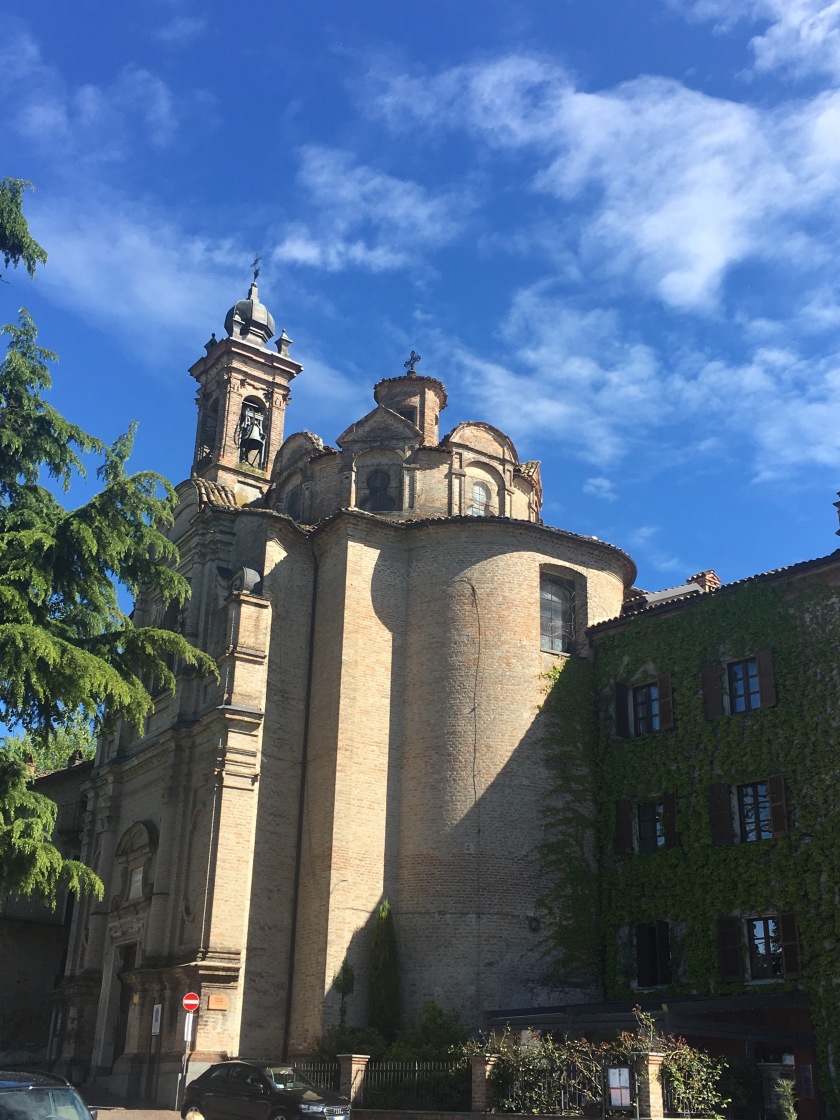 We also made a day trip to Turin which we really enjoyed- for a large city it had a nice ambience with many stately buildings lining the wide streets and a large pedestrianised area in the centre. Richard did well buying some clothes at the market we visited first- really good fashionable gear. Then it was off to the centre for a wander and lunch – not to mention sampling a bicerin, the local version of a hot chocolate which apparently originated at the cafe of the same name which of course we had to visit.

Think hot dark chocolate with a dash of coffee and some alcohol with a cream topping.

The centre of Turin.

Next stop – Lake Maggiore in Lombardy