We arrived at a campground near Nice on the Friday, chosen for its proximity to the airport as Anna was flying in that evening to join us for the long weekend. It was good to be out of the Mistral wind which has been blowing for a few days while we were in the Vaucluse, making it very cold even though it was not strong by Mistral standards. Driving the van to Nice was interesting as the wind was so strong in exposed places.

We had purchased a tent for the various visitors we are expecting – great little tent and so easy to put up. First night was absolutely freezing for Anna in the tent, down to about 5 degrees. She ended up wearing a beanie and lots of clothes as well as a duvet and lots of rugs. It withstood some heavy rain well so we are pleased with our purchase. 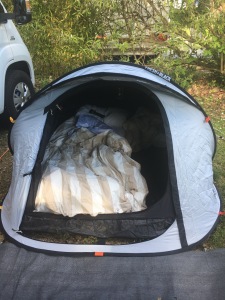 Our first destination in the area was Old Nice – to get there we drove along the road that was the site of the terrible massacre of people by truck last year on Bastille Day.

We enjoyed strolling around the narrow streets and then walked up to the view points which look back along the Nice waterfront as well as over to the port area. 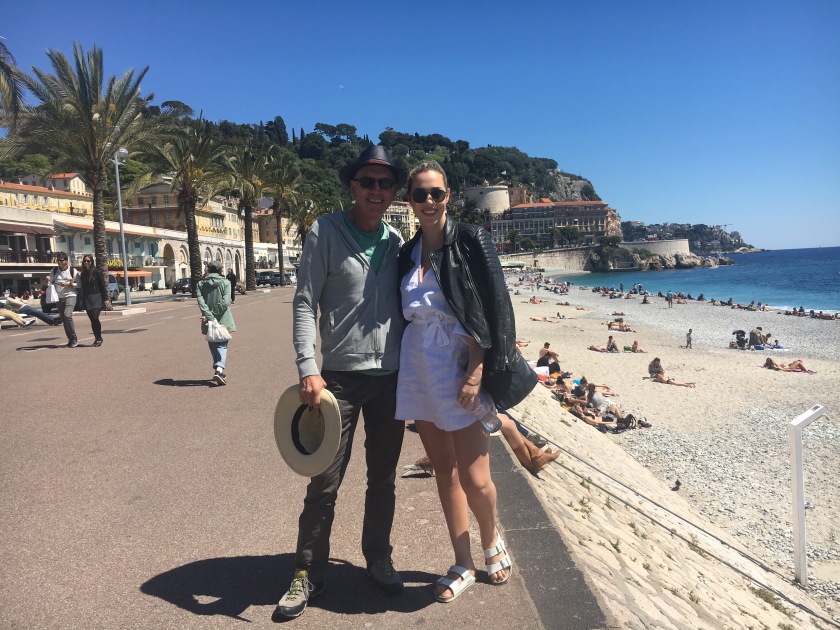 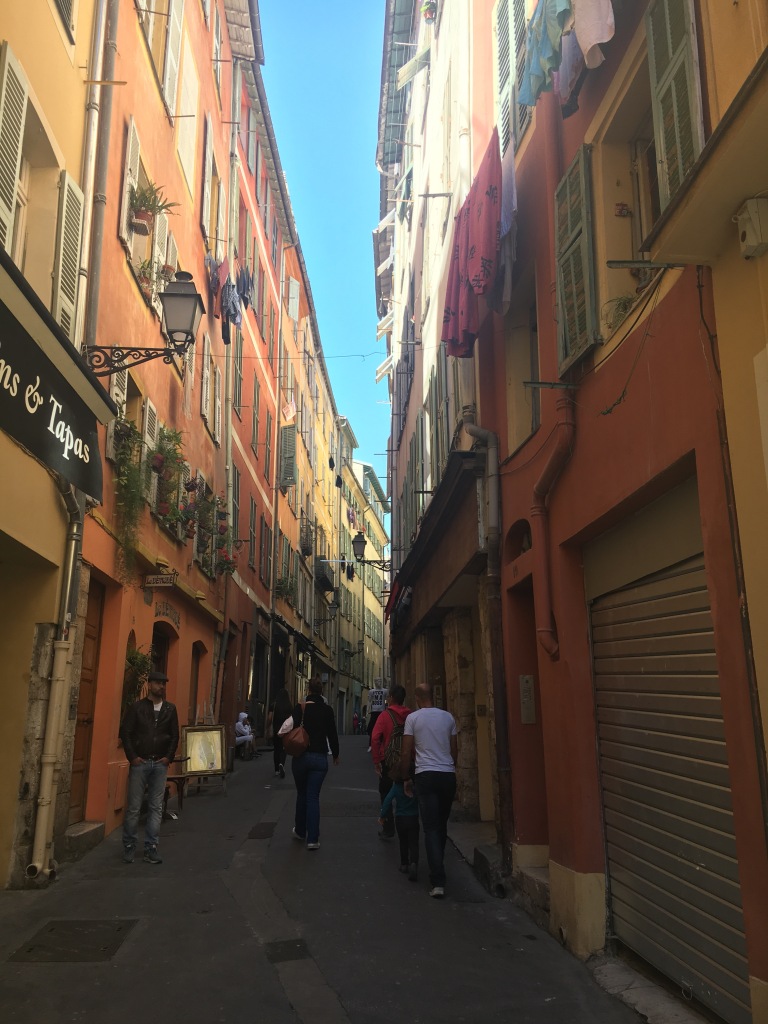 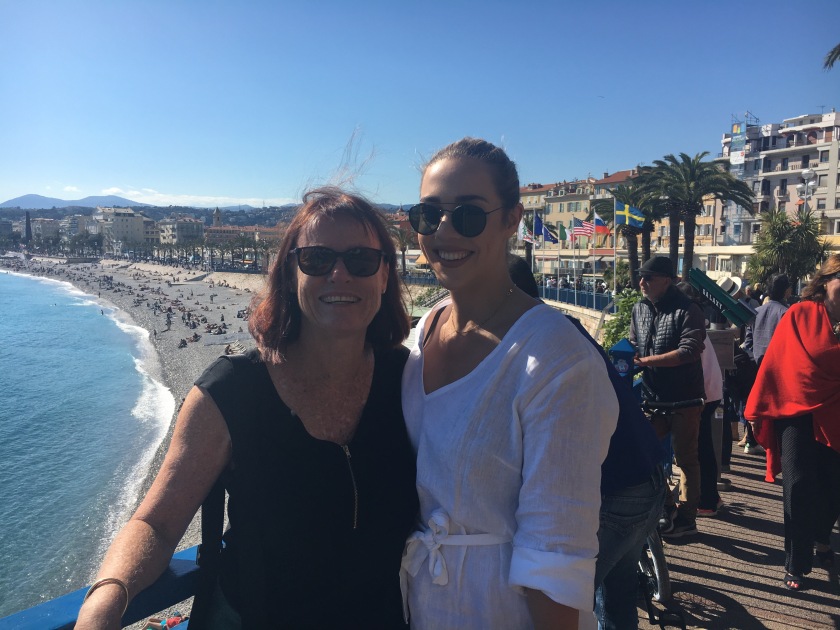 We had booked a restaurant for that night, not realising its location was at the top of a medieval bourg above Cagnes sur la Mer. Following the GPS we arrived at a point where the sign said the road was less than 2m wide – but that was the distance between the walls of the houses and didn’t take account of kerbs, steps and pot plants. Once again we had to fold in the wing mirrors on Twiggy. We found the restaurant but no parking anywhere nearby so it was a big circuit to the bottom of the hill and back up again to a parking area outside the bourg. The walk up through the medieval village to the restaurant was amazing – we found garlands of fresh flowers decorating the streets in preparation for the May Day festivities and a family decorating bikes in one of the narrow streets for the kids’ bike parade the next day. 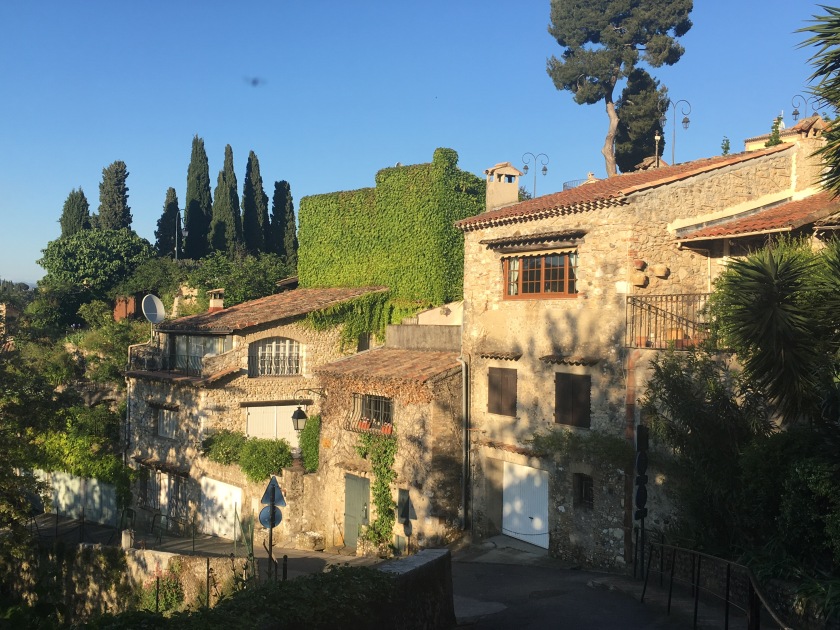 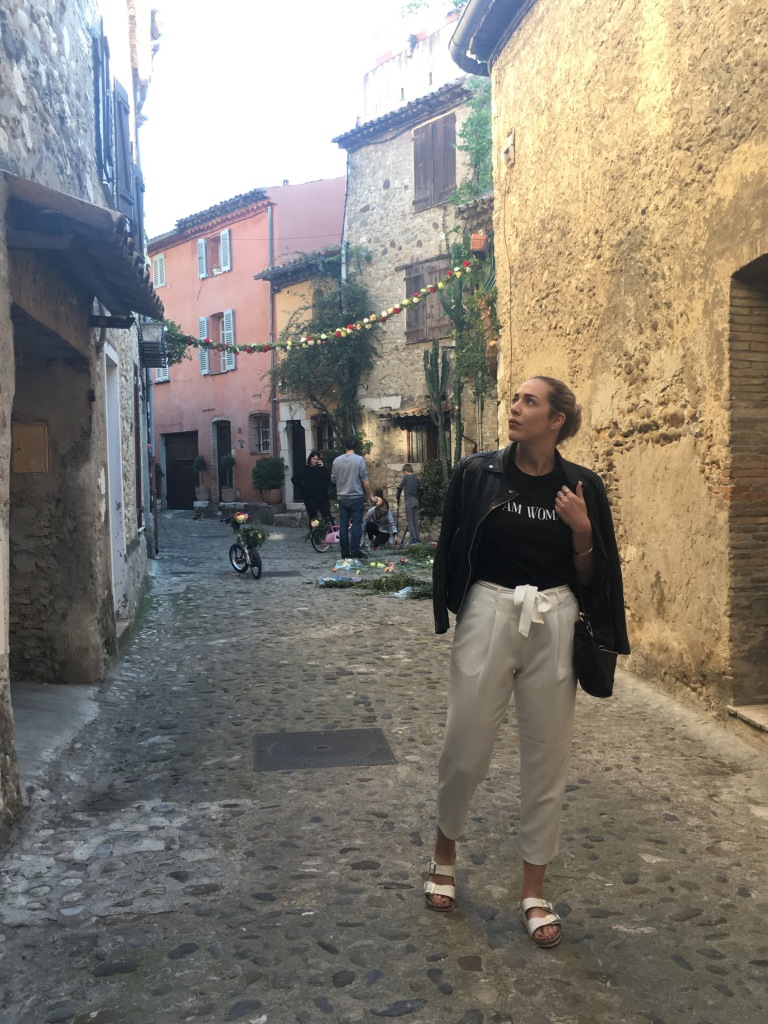 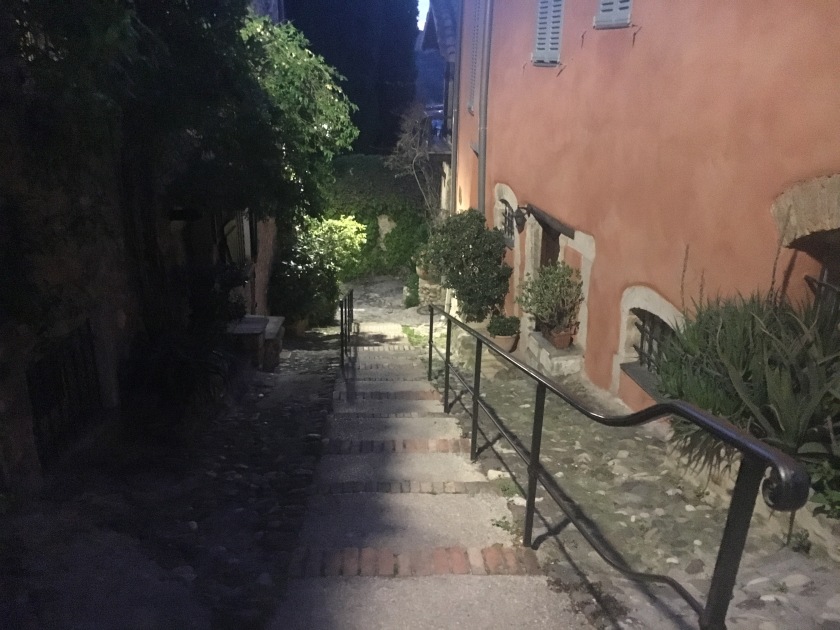 Luckily the restaurant was worth the effort – another small place run by a husband and wife team.

We had read that Le Cap d’Antibes was a beautiful area for a coastal drive and picnic but hadn’t counted on the crowds of people wanting to do the same on a long weekend. Actually traffic around Nice is a nightmare all the time. Parking was impossible to find but with Twiggy being so small and some very good parking manoeuvres by Richard we managed to squeeze into a place not much bigger than Twiggy close to a photogenic bay. Lots of beautiful homes around here and a very exclusive hotel. 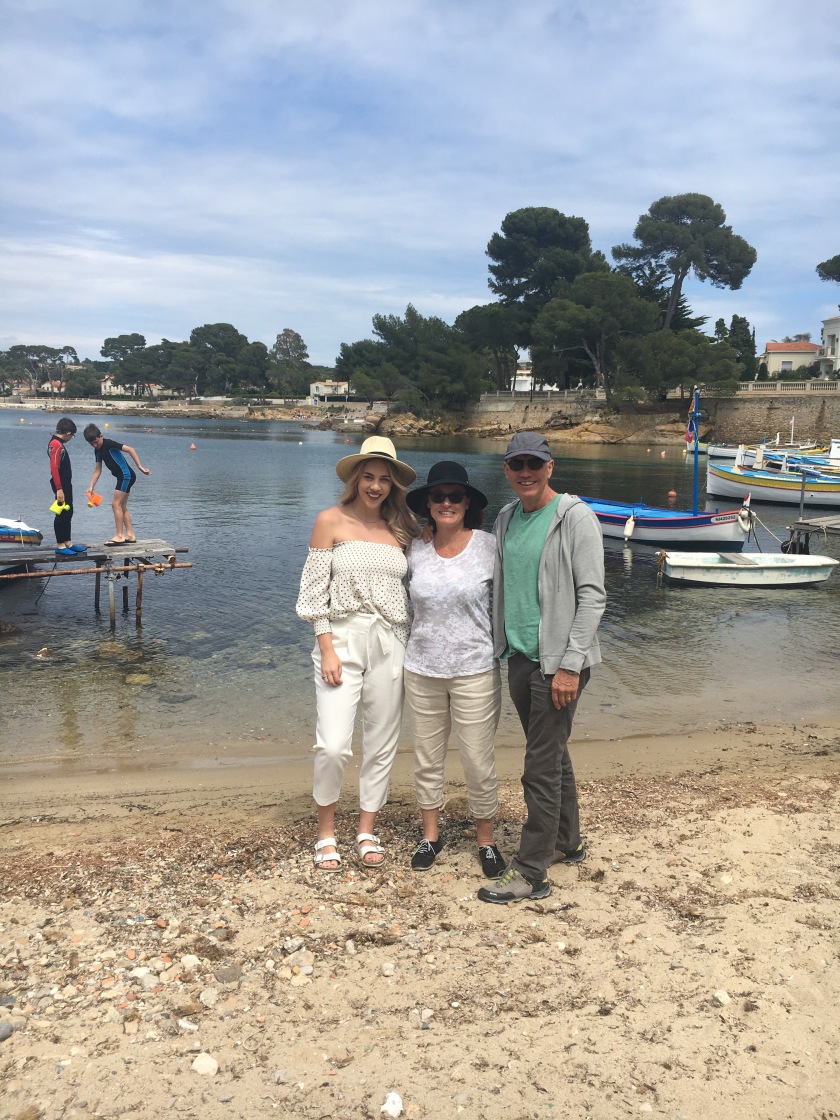 Again we were lucky with parking in Antibes which meant we could walk around the waterfront on the edge of the old town and gawk at the super yachts which were pretty impressive. We found a small bronze statue “Juliette ” which we loved and bought – we met the woman who made it in her workshop there. 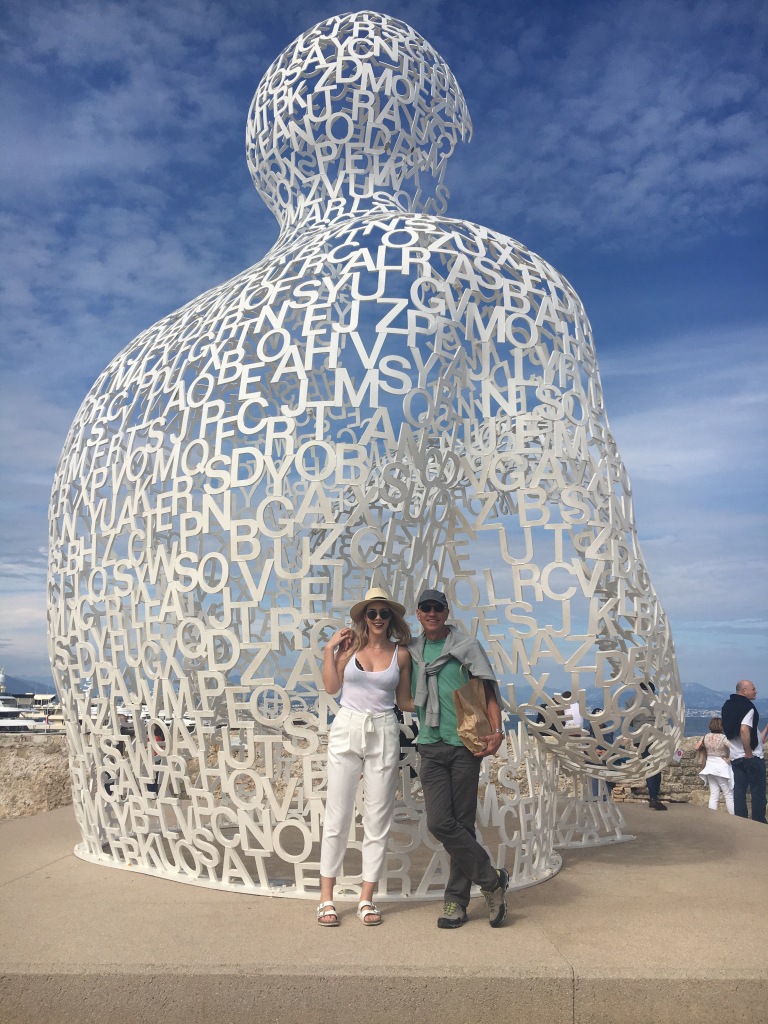 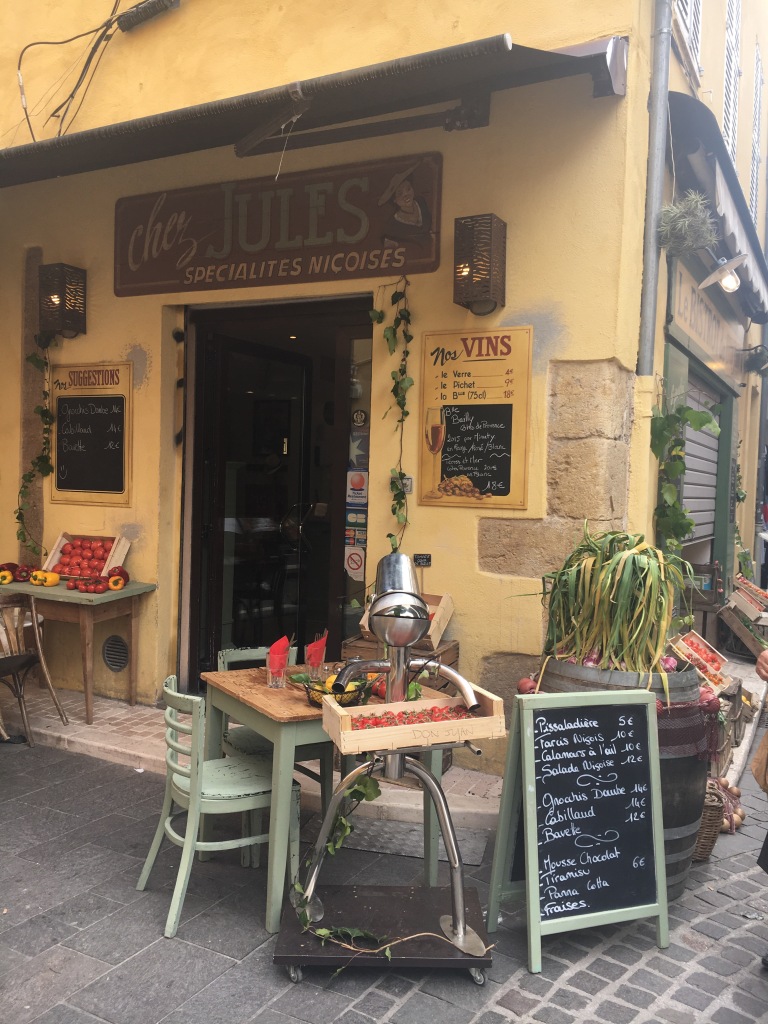 Our last day with Anna we visited St Paul de Vence a very picturesque town up on a hill inland from Nice. Some beautiful artwork there but very expensive. It is a popular place with visitors. 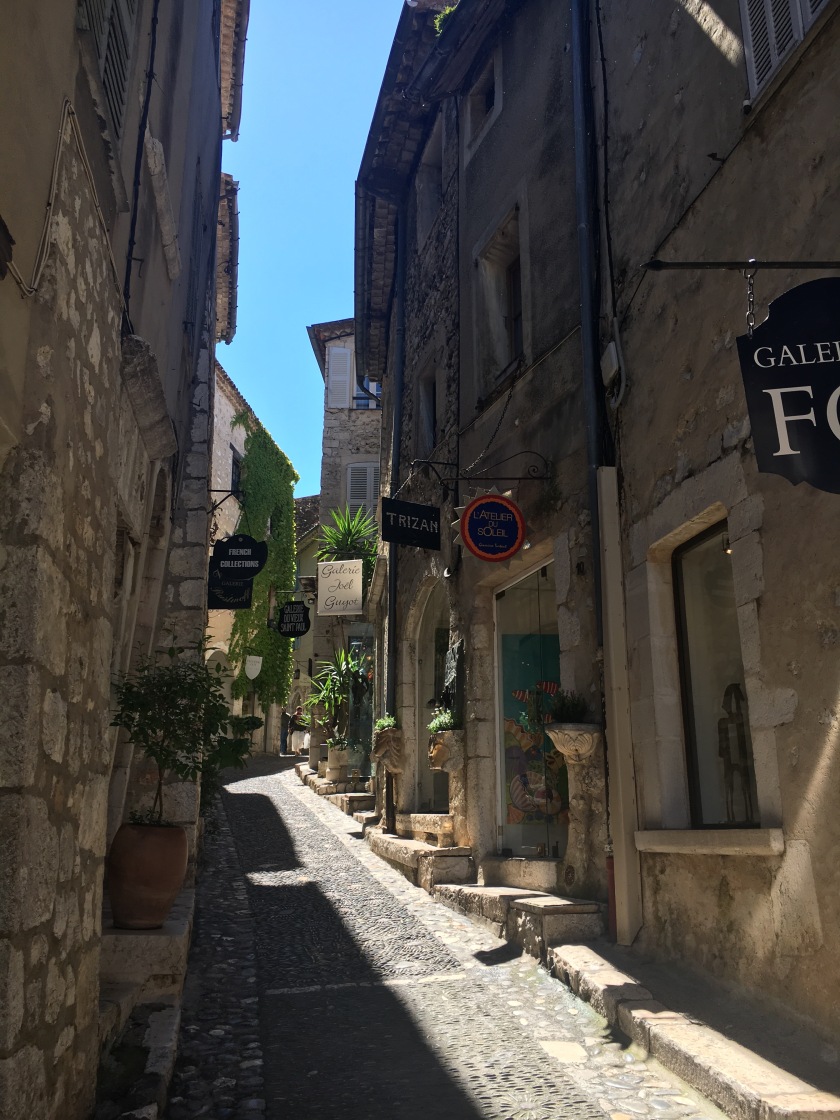 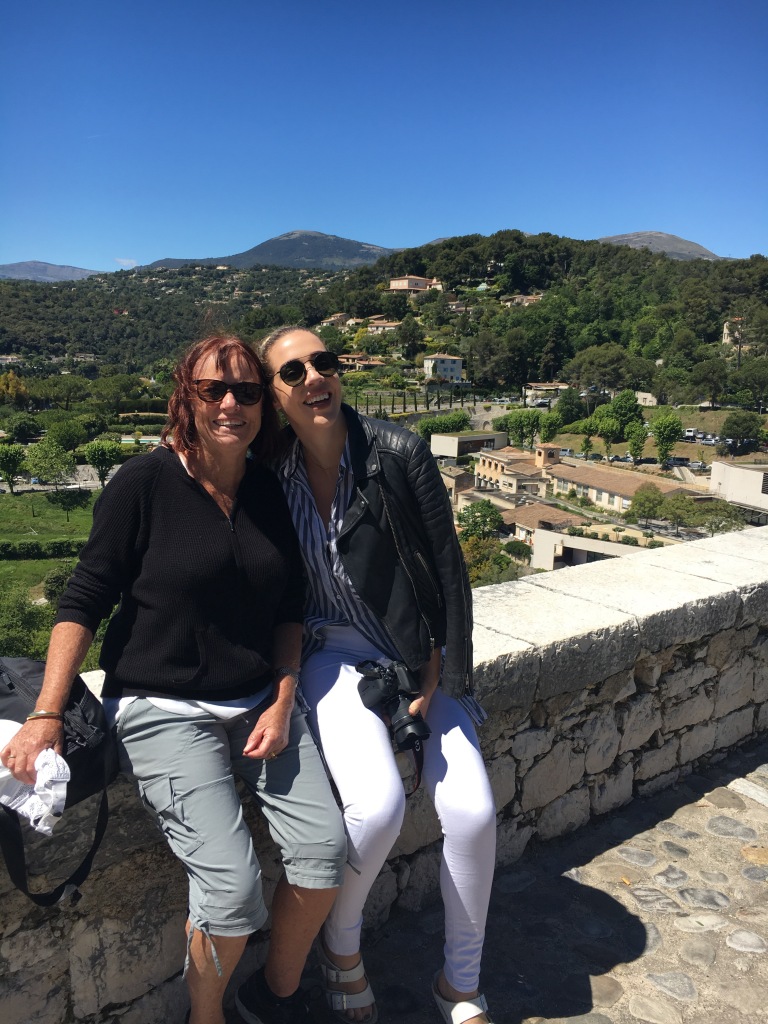 Next stop – Piedmont in Italy.

2 thoughts on “Around Nice”