After breaking our journey in Grenoble ( not a place to get too excited about) we made it down to a campground about 45 minutes north of Marseille. The only one closer said they had already shut for the season when I rang – although when by chance we drove past it the next day and saw motorhomes in it I did wonder! Mind you it would have been a considerable challenge to drive the van plus trailer to it – the roads were very narrow and windy and in a built up area. Driving Twiggy along them was enough of a challenge for Richard. Mind you, most cars in Marseille seem to have dents and scrapes.

We did a quick pack and headed in to stay with Jean Louis and Francoise who live in the hills north of Marseille. We felt quite privileged to join them for Jean Louis’s birthday dinner.  Richard really appreciated having a local to drive him around over the next couple of days. The locals have nerves of steel and a finely tuned awareness of the width of their vehicles and manage to drive at speeds we couldn’t even contemplate on those roads. Francoise was a wonderful tour guide the next day and showed us the highlights of Marseille. The weather was magnificent and the views from Notre Dame de la Garde were amazing. 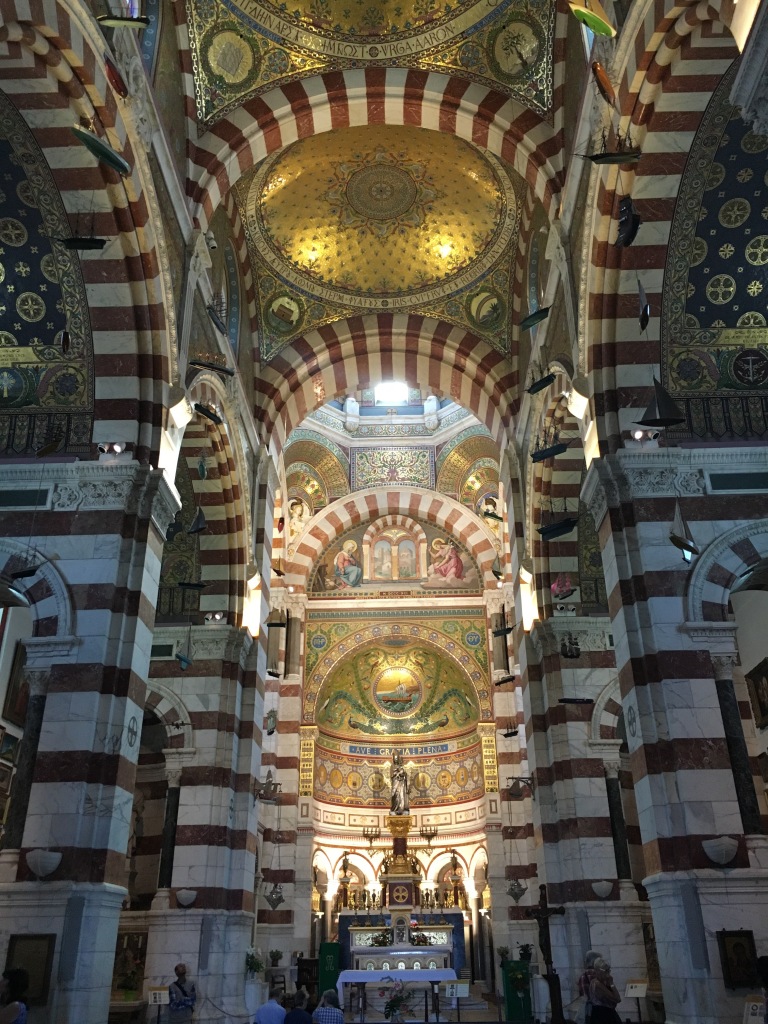 We loved the old part of town. It was surprisingly quiet. 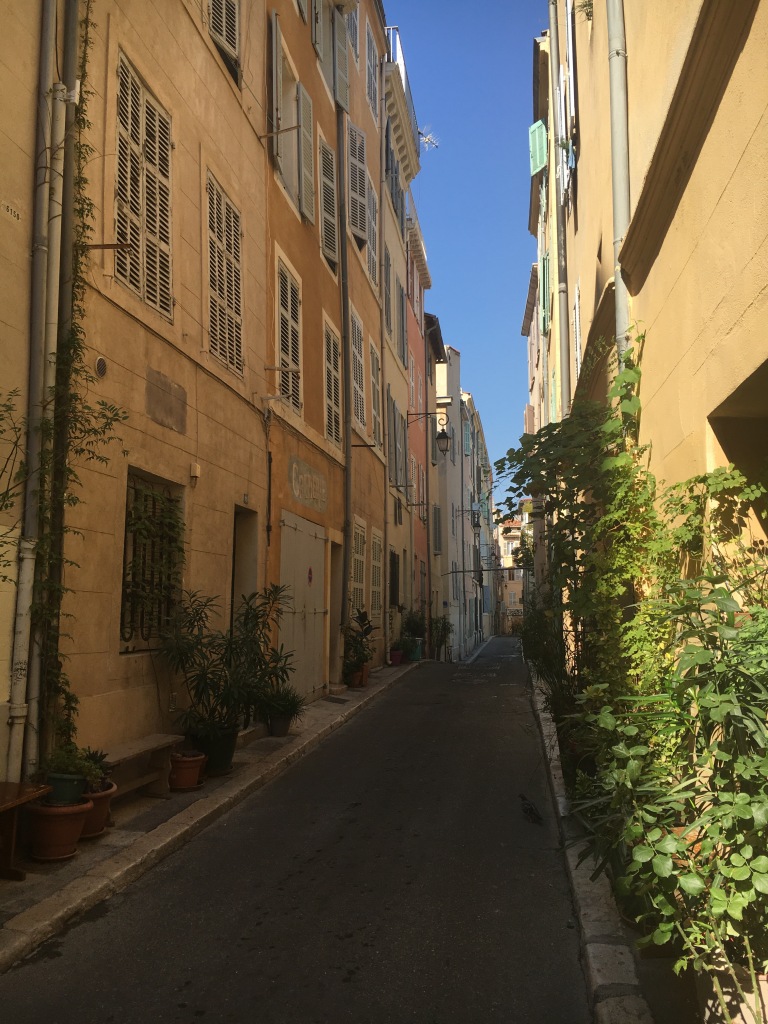 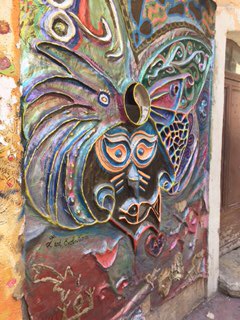 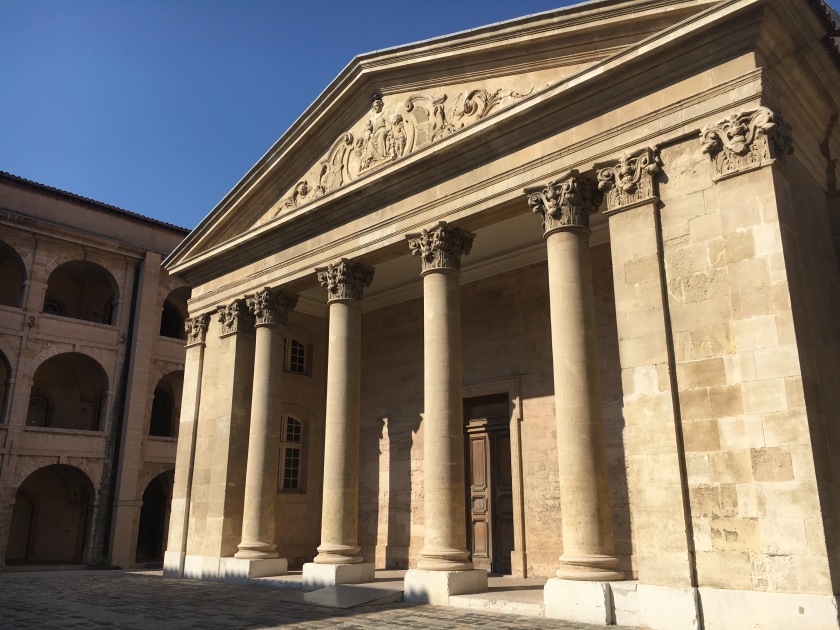 The next day Jean Louis had arranged for us to play  golf with them at their local course. It was quite something – very challenging for the men who often had to tee off a long way back from the women even on a Par 3 – but very enjoyable. The club also had a very lively social scene – they obviously had the right formula for making the 19th hole attractive for people to hang about in unlike so many clubs back home and in Australia.

We returned to the van later that day, having decided to visit Aix-en-Provence the next morning before moving on to a campsite where we were going clean and pack up the van. A short visit turned into a somewhat longer one as we really enjoyed wandering around the town, not to mention doing some shopping. 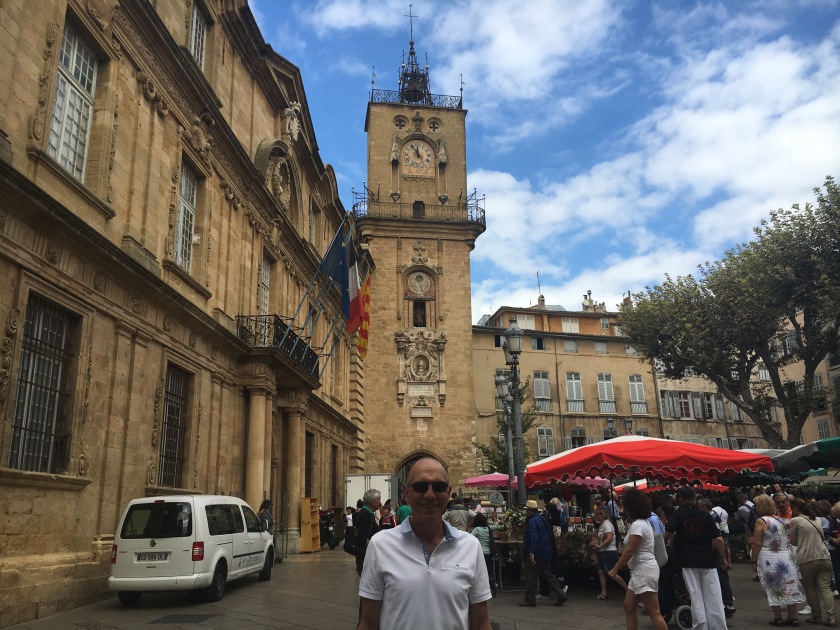 Having finally reached the end of our trip we stopped in a campground near Arles and spent 2 full days cleaning and polishing the van and packing up.

Early on the last day we headed to the camper van storage facility we had booked to the west of Arles with some trepidation. I had sent numerous emails to the owner over the previous few weeks trying to let them know when we would arrive and to confirm that someone could take us to the airport at Marseille. I ended up ringing when I didn’t receive a reply and spoke with his daughter who told me to ring the caretaker. When I rang him, he could not understand any of my French ( which was a first for me) and I could not understand him. In desperation we got Francoise and Jean Louie to ring him with our questions. We were shocked to find out that the owner had died only  about 10 days earlier! Just when I had been emailing and ringing them – I felt so bad but his daughter had not said anything.

But it all turned out well. The storage is good and nice and dry. Face to face, the caretaker and I could understand one another even though he had the most unintelligible French I have come across. Even Francoise had trouble. He said the owner’s wife and daughter knew nothing about the storage facility. But we were reassured when he said that the wife was not going to sell it and that I should email him directly about when we will return next year. Good to know the van is safely stowed away for the winter.

We have covered 12,000 km in the van and 8,000 km in Twiggy – all without a scratch as Richard proudly says. It is a huge distance, mainly because of going to Nordkapp. I am sure we won’t cover anywhere near that distance next year.

NZ is at the same scale.

And now it is time for a few days in London to see Anna and catch up with friends before heading home. Felt sad leaving our little snail house for the last 5 months. It has been an amazing way to travel.