From Geneva we headed to the Haut Savoie south of Lake Geneva. It was so good to be in the mountains again. Such a beautiful area. We ended up spending 5 nights in Samoens, a very attractive small town.

The weather was magnificent and we had planned on doing some serious hiking but me catching a nasty cold ( Richard had it first)  limited our activity. Still we managed a walk from the high pass Col de Joux Plan between Samoens and Morzine to a point with a magnificent view of Mont Blanc and other mountains. Unfortunately the air was a bit hazy (seems common in late summer and autumn in the Alps) with a bit of low cloud coming up from the valley so the photos were not as good as I hoped. 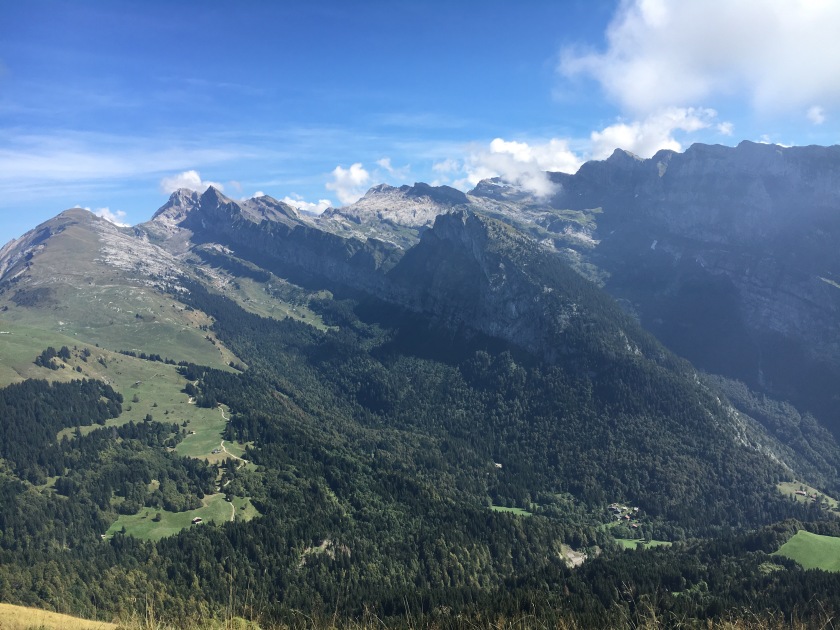 Saw one of the prize fighting cows they have in the area. Apparently at a certain time of years these cows fight to determine who will lead the herd. They are a distinctive black colour.

After we drove down the other side to Morzine and were very glad we had stayed in Samoens. Morzine was like a ghost town apart from construction activity – just about everything was closed and very few people were around despite it being a lot bigger than Samoens. We could see the ski resort Avoriaz perched on top of a huge cliff further up the valley. To be honest it looked to be a bit of a 1960’s monstrosity like La Plagne where we skied in January but I am sure the skiing is fantastic like La Plagne. Morzine is quite low so you would want to be sure of the snow before going although it links to a huge ski area.

There is a huge Cirque up the valley from Samoens with many good hikes departing from the area. We managed a couple of short walks. The scenery is so majestic with huge cliffs towering above us on both sides and a beautiful forest in the valley between.

The autumn colours are starting to become more apparent. It is a great time of year to be travelling. We cannot understand why there are so few people around. Many campgrounds are closed and we are having to be careful to ring first as a few close earlier than they say on line. Also many businesses are shut. At least Samoens is a real town and not just a tourist resort so most restaurants were open. We managed to have a couple of good meals there.

Samoens has a skifield which has its base station about 900 metres above the valley. It links to Flaine. They don’t get much snow in town but there is a gondola to take you up. We drove up there one day and a huge Club Med is being built there – obviously their business model is doing OK if they can build something that is only open a max of 4 months a year.

We have decided that we would love to return to Samoens next year and spend a couple of weeks there as a base for going hiking. There are so many good hikes in the area.

The day we left we decided to go via Megeve as apparently it also is good for hiking and we wanted to check it out. Unfortunately the Tourist Office was closed being Sunday despite lots of tourists being around so we will have to do our research on line. We had hoped to pick up a book of walks as we have for Samoens. Megeve has a very pretty town centre which is largely car free but overall it is much bigger and more touristy than Samoens. We had trouble finding parking for the big rig – the area we had been told to go to was filled with the annual dairy cow show. Think dog or cat show but for cows. All these magnificent beasts were lined up with their beautiful collars and bells (no plain ones for these champions) waiting to be judged. The judges had to check both ends too but sometimes the cow was reluctant to cooperate.

Saw this beautiful cow at the entrance to town.

We now just have over a week before our travels in the van for this year are over. We are both feeling quite sad as we have enjoyed our nomadic lifestyle so much. But the reality is that most campgrounds are closing in France even in the south and we would have to go to the south of Spain to continue. Also we will have been away from home for 5 1/2 months which is quite a while. We are already looking at our options for next year – will it be Italy and Greece followed by some time in the Alps hiking or do we head into Eastern Europe? We are heading south now with a brief stop in Grenoble before stopping near Marseille to visit friends. Then we take the van to the storage we have arraged near Arles and spend a couple of days sorting everything out before flying back to London to see Anna.