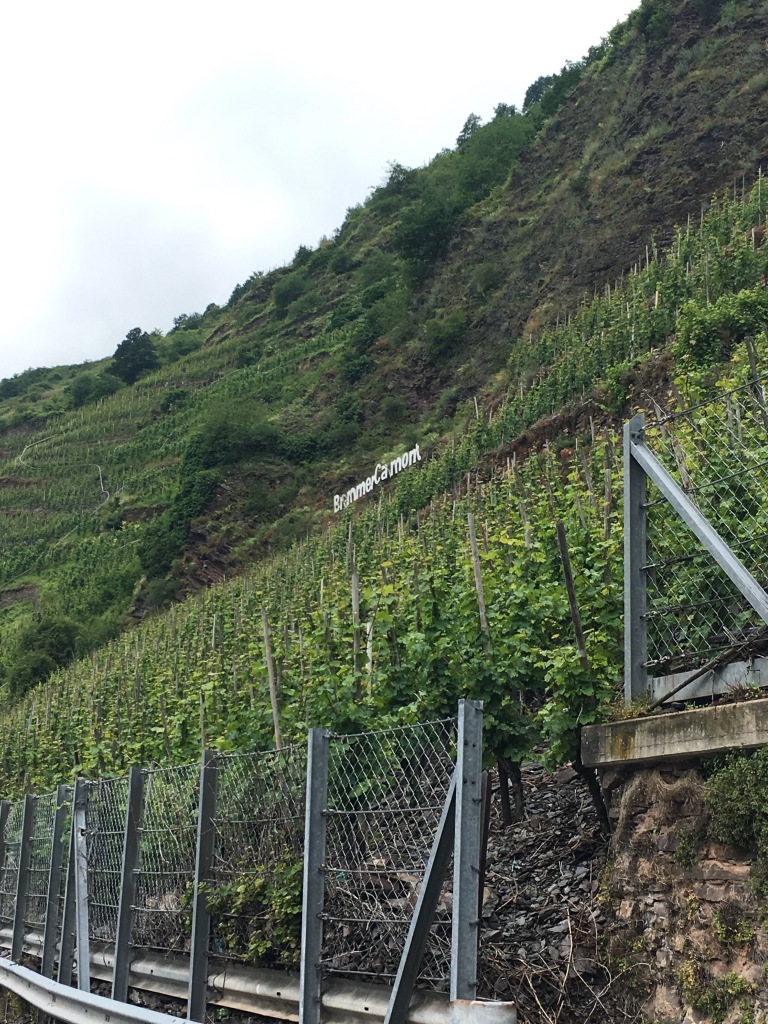 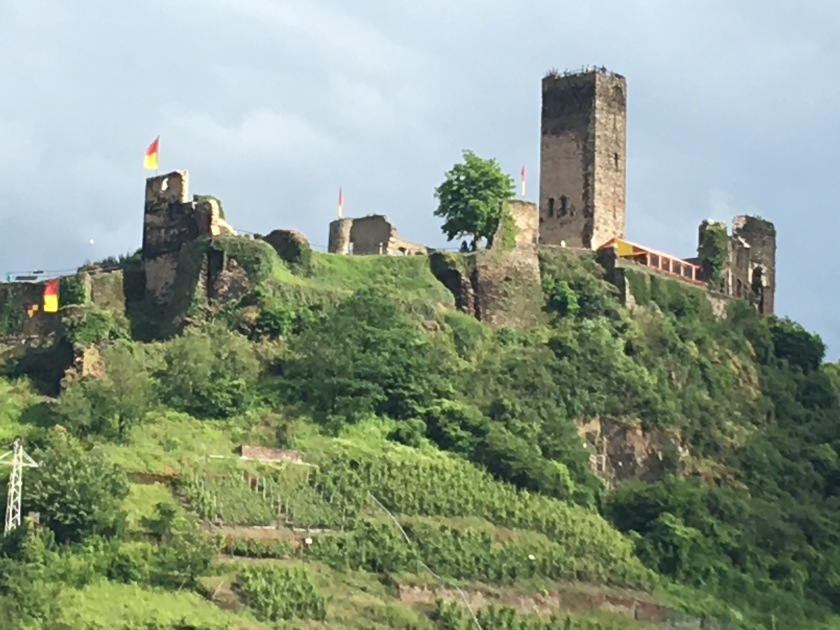 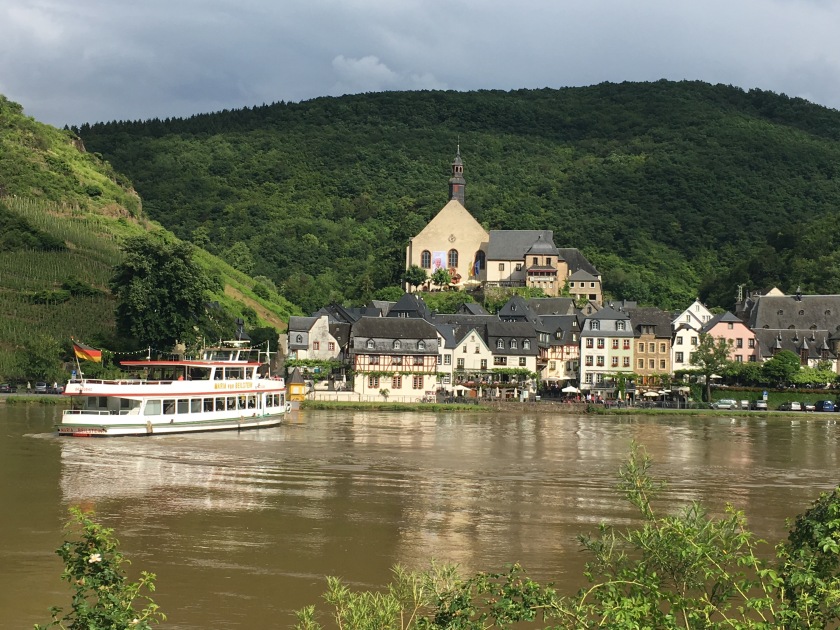 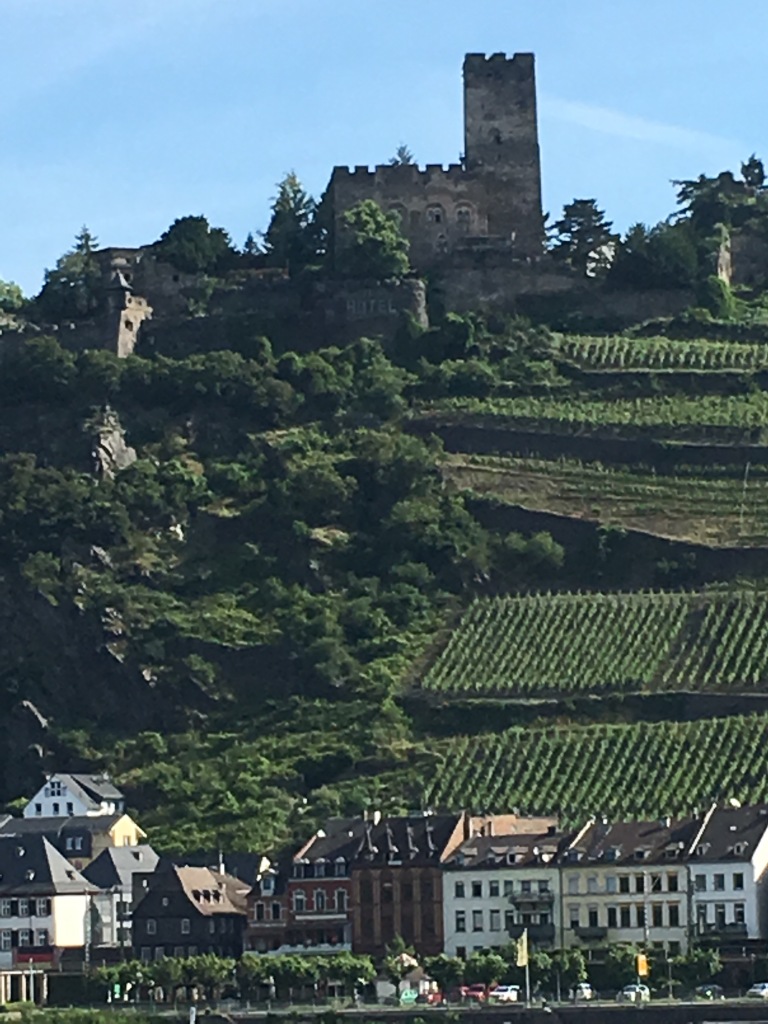 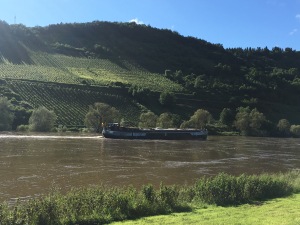 View from our campsite

Our trip over from France was punctuated by thunder storms and some of the heaviest rain we have ever seen. Needless to say when we arrived at our chosen campsite by the Moselle River, the puddles were joining up. We both said – “this would be lovely on a nice day” – and within an hour or so the sun came out. And it was lovely albeit boggy underfoot.

The Moselle Valley lived up to expectations. Beautiful towns and villages framed by vineyards reaching down to the river with a castle or three thrown in for good measure. The world’s steepest vineyard is reportedly here (65 deg slope) see photo above . We had a great couple of days exploring up and down river. The highlights included Bernkastel-Kues, Beilstein and Burg Eltz. The first  two were small towns straight out of a storybook with half timbered buildings dating from 15 and 16th century including one little narrow house dating from 1416! Great photo opportunities apart from a thunderstorm in each town. But we have actually been lucky despite the large amount of rain. It has mainly occurred at times that haven’t worried us, like at night. 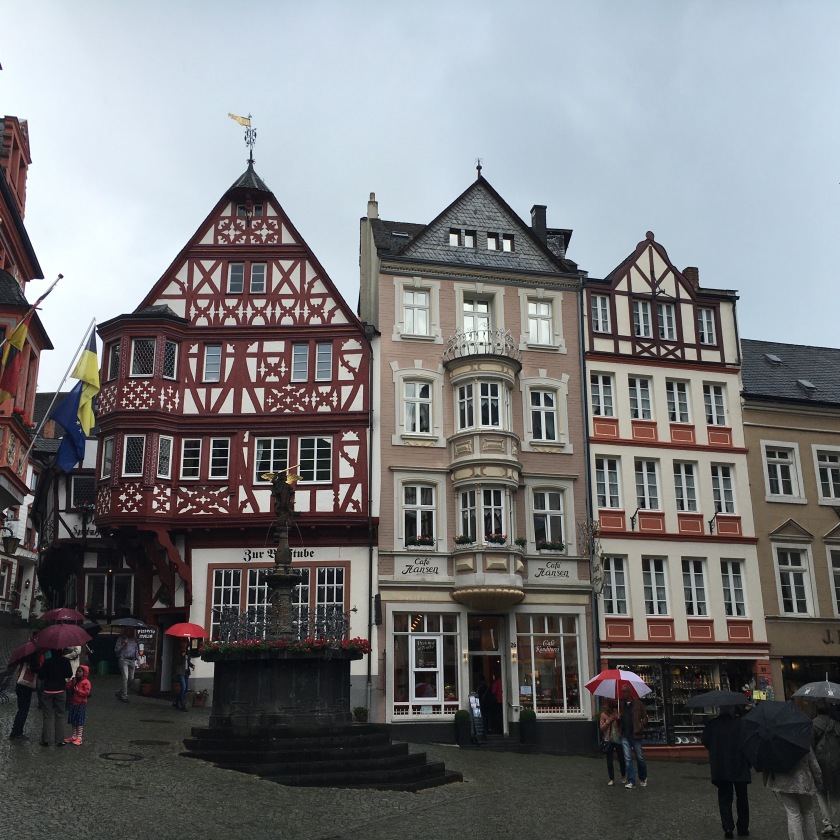 Bernkastel-Kuez with 600 year old wooden building (below). Second storey overhangs to allow carriages to pass below.

Burg Eltz was reached by a 45 min walk up through beautiful forest and, yes some mud. We have now decided to keep our hiking boots in Twiggy so that we are always prepared.  Exercise at last! We were worried that we were turning into blobs with all that yummy food in France.  The castle has been owned by the same family for 900 years and has been largely unchanged for the last 400. 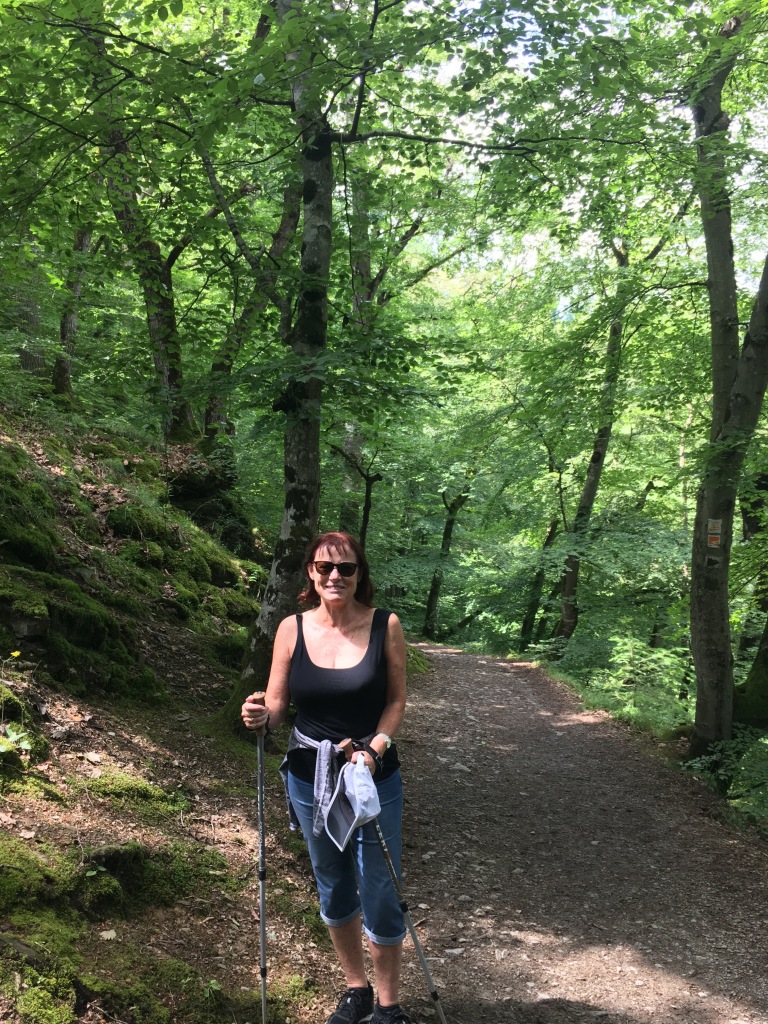 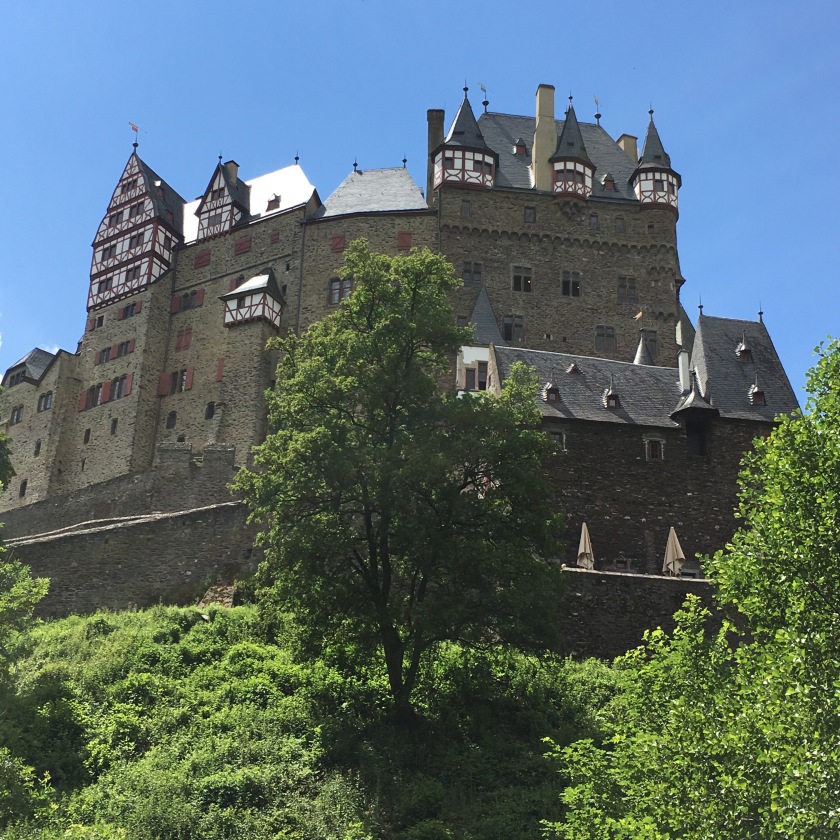 We visited an ex monastery Kloster Machern  one day for lunch which now is widely acclaimed for the beer they brew there. Unusually for me, I really liked the dark brew so we came away with a bit of both. The bratwurst sausages actually tasted quite good served with a large pretzel. The plant decorations are dried hops! 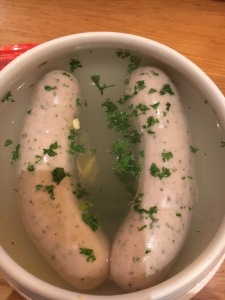 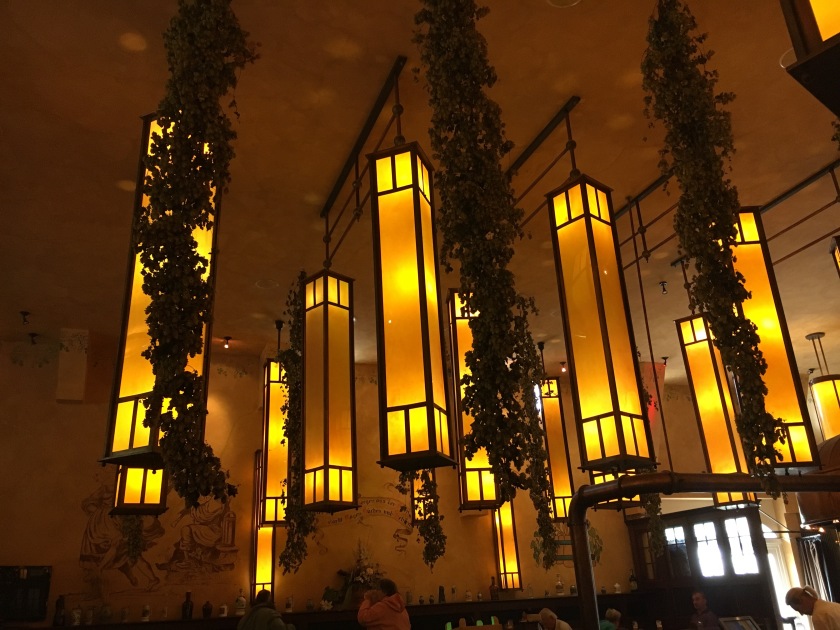 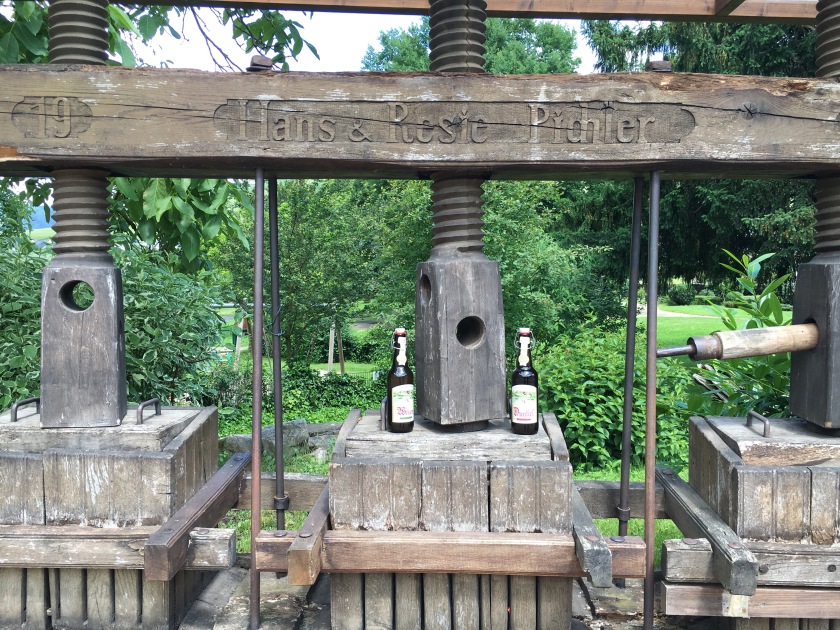 After 3 nights we crossed to the Rhine Valley which is hugely important as a commercial waterway with large numbers of enormous barges going up and down, not to mention hotel barges which travel along its navigable length. Not as pretty as the Moselle but impressive, especially as it was several metres above its usual height and lots of low lying areas including campgrounds beside the river were flooded. We thought we had sorted a campground near St Goar about 800m from the Rhine – we rang and they said they had larges pitches and plenty of room for us! After Co pilot had taken us down a one lane switch back road for several km which wasn’t wide enough for 2 cars passing let alone a camper van plus trailer we decided we needed to refine the road setting preferences for the van to even more strongly avoid minor roads. Then we arrived at the campground to find we couldn’t even turn into it from that direction. Decided to try our luck along the river. That’s when we discovered that all the sites high enough to not be flooded were taken and the river was forecast to rise another 0.5 m. So it was back to the hills this time by a marginally better but circuitous route. The best route had a flooded tunnel under the rail line and the next 2 were not high enough. Guy may laugh but we haven’t got caught yet by low tunnels. 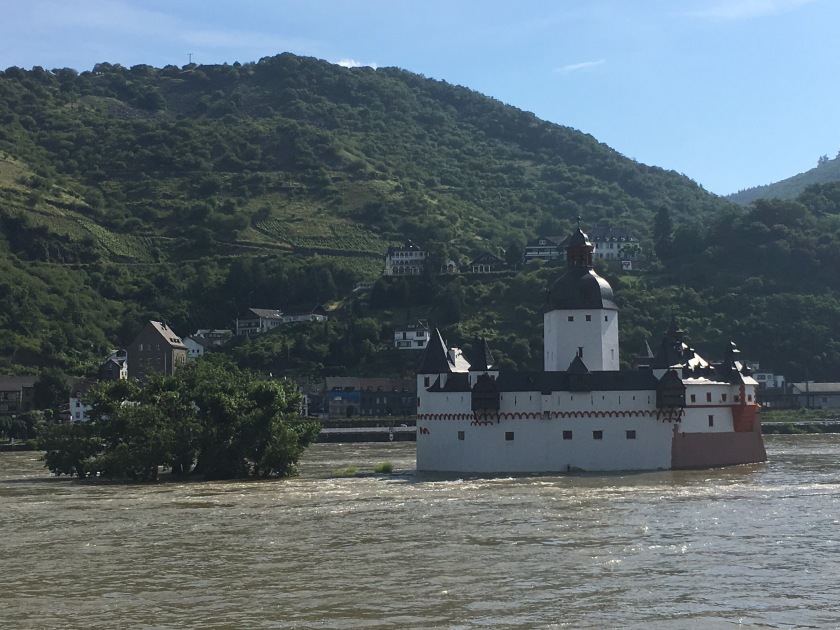 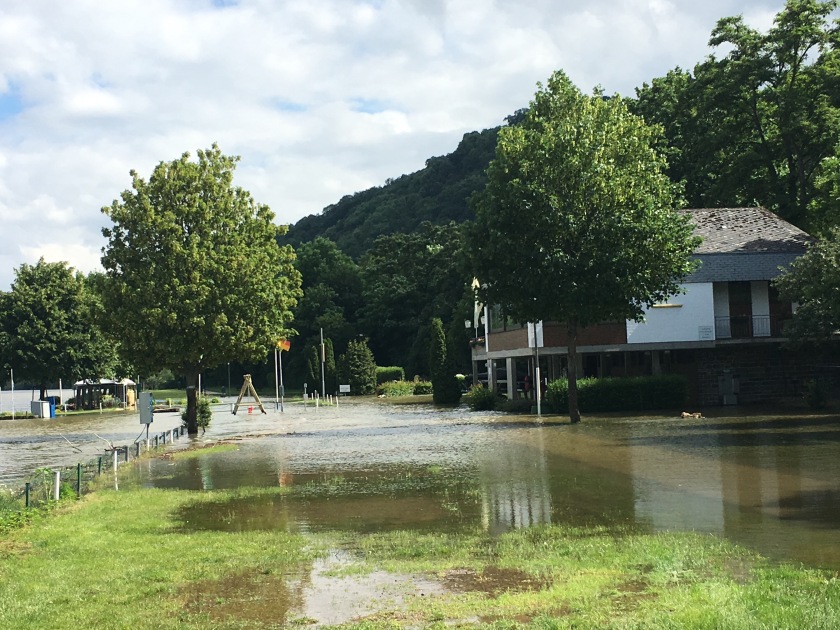 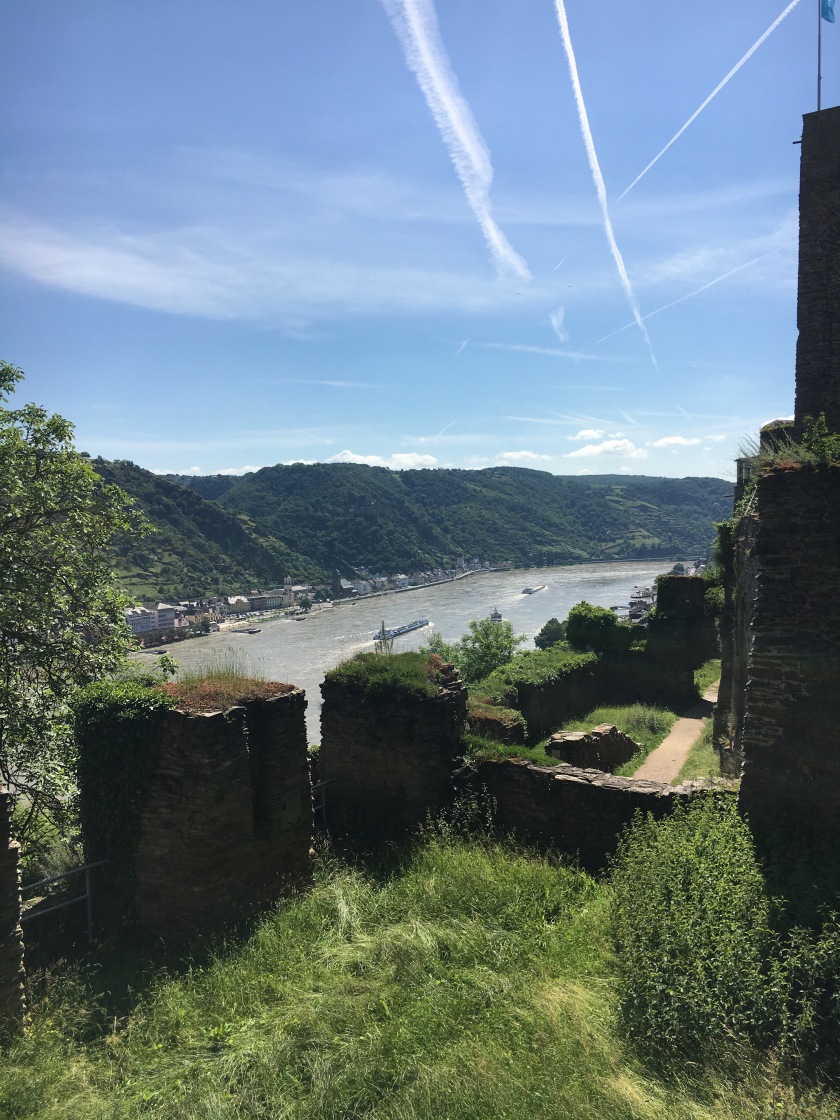 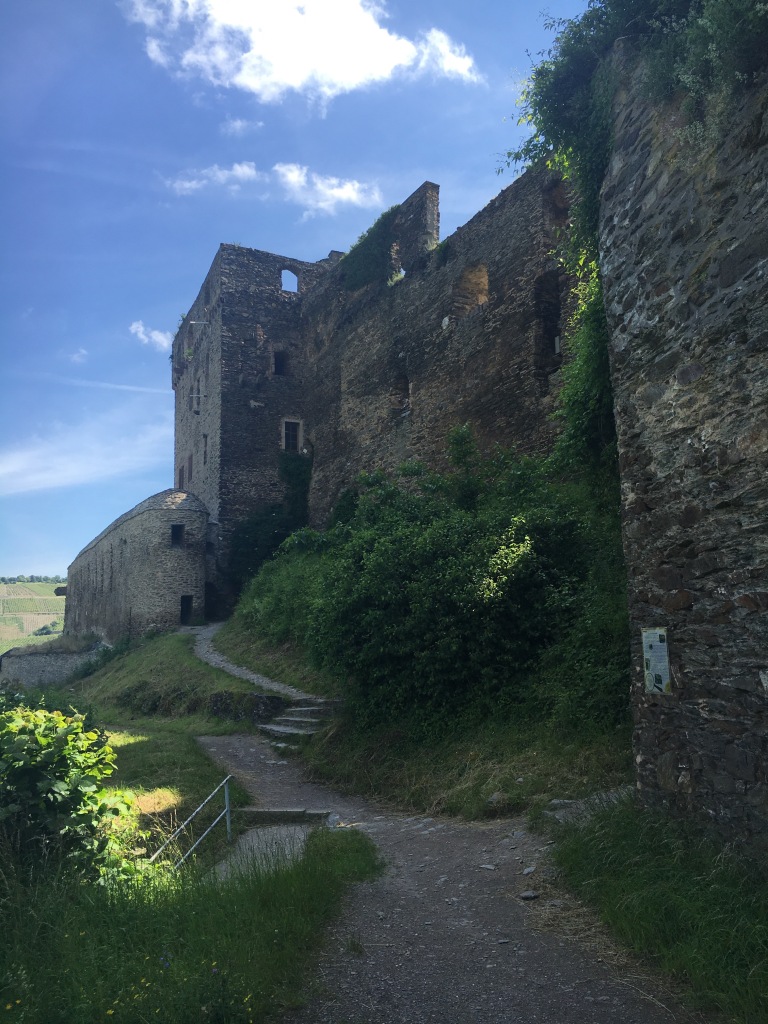 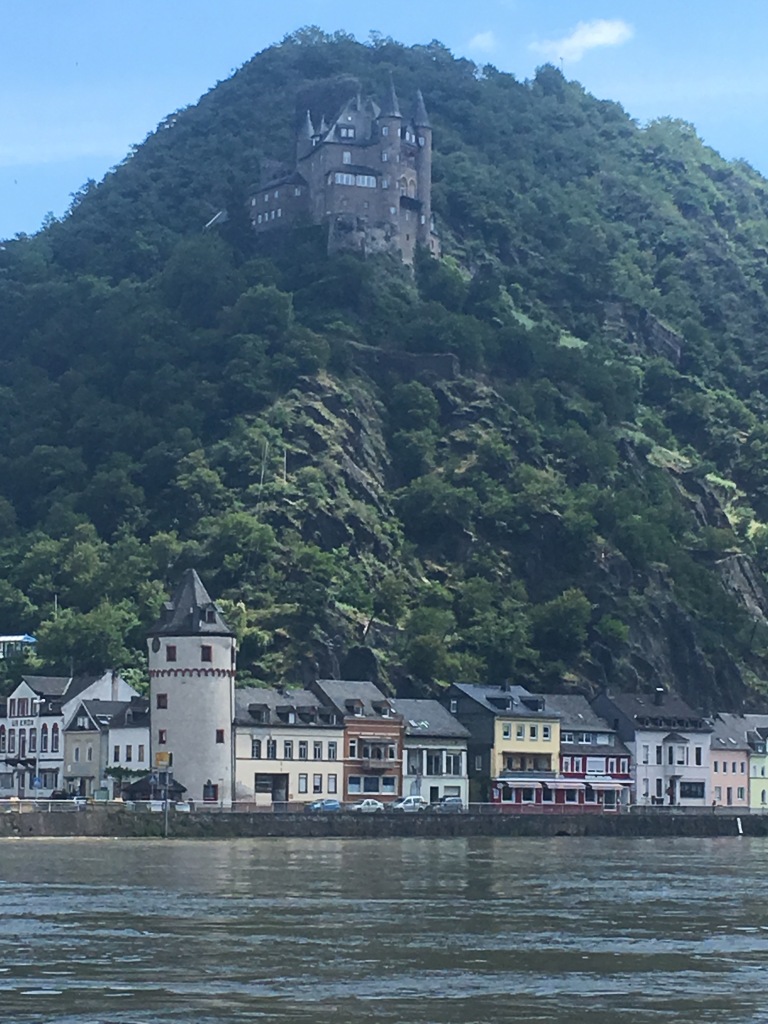 Despite all the rain it hasn’t really affected us much. Campgrounds have been a bit soggy but we have managed to find firm enough ground. The highlights of the Rhine were Burg Rheinfels ( a huge  crumbling fortress high above the town of St Goar where you can explore down dark low tunnels etc etc if you really want but I decided there were limits to how far down I was prepared to go) and little places like Bacharach where you can walk around most of the city walls and down past an abandoned church- no damage just unfinished) 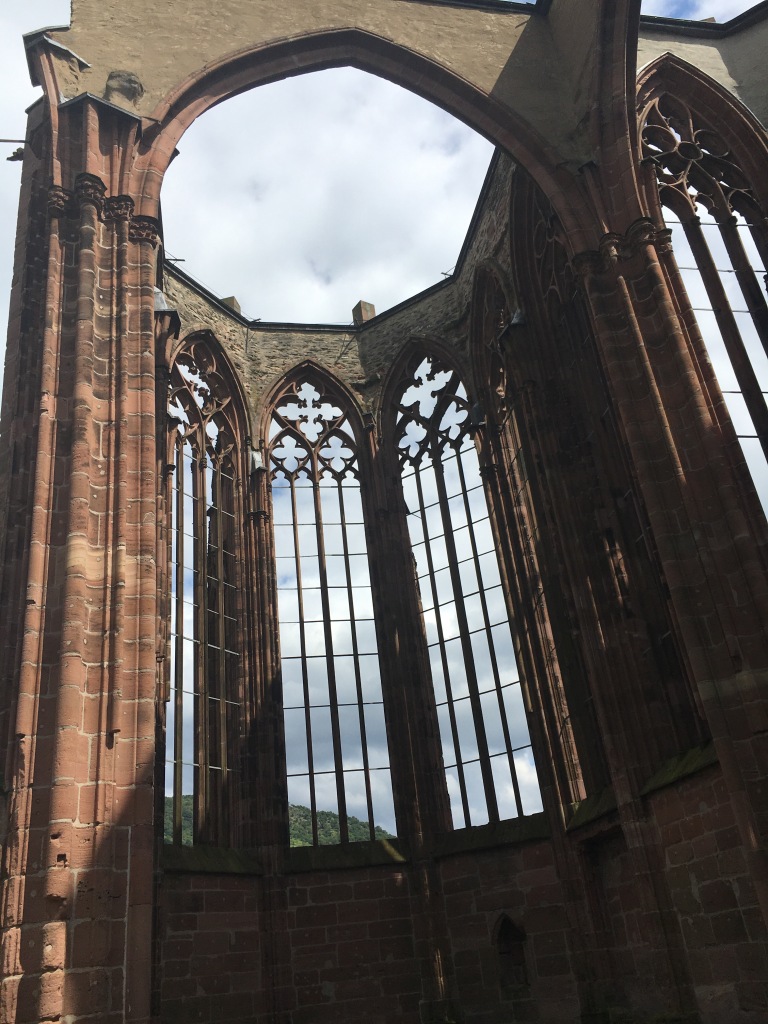