We are in the far north west corner of France in a part of Brittany called La Finistere staying at another delightful  Castels campsite Domaine L’Orangerie de Lanniron. It is very close to the delightful town of Quimper. What is interesting here is that a lot of the road signs and others are in la Bretagne, the local language which is closely related to Gaelic and Welsh. Not sure how the locals get on with the pronounciation as it is so different from French. A lot of the towns have 2 names and some roads are purely in la Bretagne.

The first day R decreed it as a no driving day so we walked into town along the Odette River which was really pleasant. It is a great time of year to travel as there are no crowds and the weather has been perfect for sightseeing – not too hot. A bit more blue sky would have been nice but apparently this area gets a lot of cloud.

The town centre contains many medieval buildings. Galettes and cider for lunch. I am really getting into the cider and much prefer it to beer but R keeps reminding me of how much sugar must be in it! So has beer!

The next day saw us head south in Twiggy to visit Concarneau and Pont Aven. Concarneau has La Ville Close, the old walled section of town. Apparently it is the largest tuna fishing port on the French coast but no sign of any tuna on any menus. Plenty of shops selling canned sardines though which are done locally. Actually they taste pretty good – better than the ones at home which stink to high heavens – and they don’t cost 38 euros a plate like some we found on a menu in St Tropez last year! Also fish soup a speciality here- it  tasted pretty good for lunch.

Pont Aven is a very pretty village south of Concarneau much favoured by artists.

Another great  day after a break for some golf was spent to the north of Quimper. We visited Le Presqu’Ile which juts out into the Atlantic. The GR 34 long distance walk continues around the coast here all the way from St Malo and further east. On a clear day there would be amazing views across the bay from the headland but still a dramatic coastline with a bit of haze. 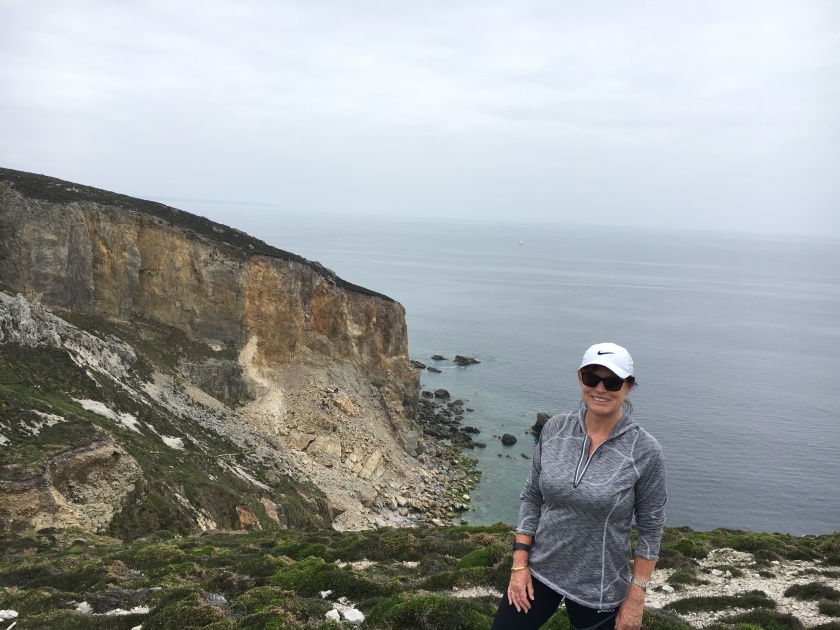 On the way back we visited Locronan which deserves its status as one of the prettiest villages in France. It is often used for film sets. 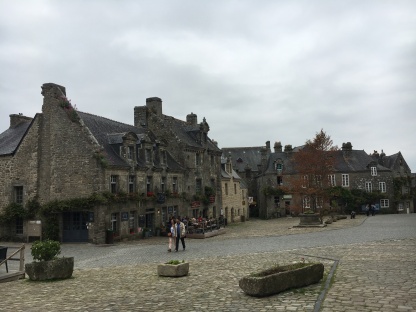 The  next day we decided to head south for a one night stop so we could see the megalithic stones at Carnac. Made our first blunder in choosing a campground. It sounded nice- close to the beach, good reviews etc. Lesson learned – don’t choose campgrounds which are really hi-de-hi holiday camps with huge facilities for families and lots of little cabins for rent located in suburban areas. We pulled into the entrance and stopped, registered after waiting in a queue and went to look at the options for our rig. After 20 minutes it was quite clear we couldn’t manoeuvre our rig onto any of the available pitches! Narrow access ways , no turning space even without the trailer. What followed exercised R’s calmness to the max. He had to reverse the van and trailer onto a narrow road with a deep ditch on the far side. Half a hour later we finally got ourselves facing the right way. It was the first time we cursed having the trailer. So we drove to another campground in the country close to the stones we wanted to see. It was another Castel site which we have found excellent so far. She assured us on the phone that the sites were spacious and we would have no trouble. Bull shit! We found one site we could drive onto but it was another hi-de-hi campground – great for the kids but very expensive- and no hot water!!! A fault apparently but not good when you are paying 2x what we have paid elsewhere.

The stones at Carnac – thousands of them were hauled into position between 3500-5000BC without the benefit of wheels .

The next morning R had more practice reversing – took 40 min to get out this time with guidance from a guy who had spent 20 years in the Army driving trucks.  The lesson is – don’t go to campgrounds with lots of cabins and few camp sites and make sure the pitches are big! Now we are in a lovely campsite in the Loire which meets ALL the criteria.